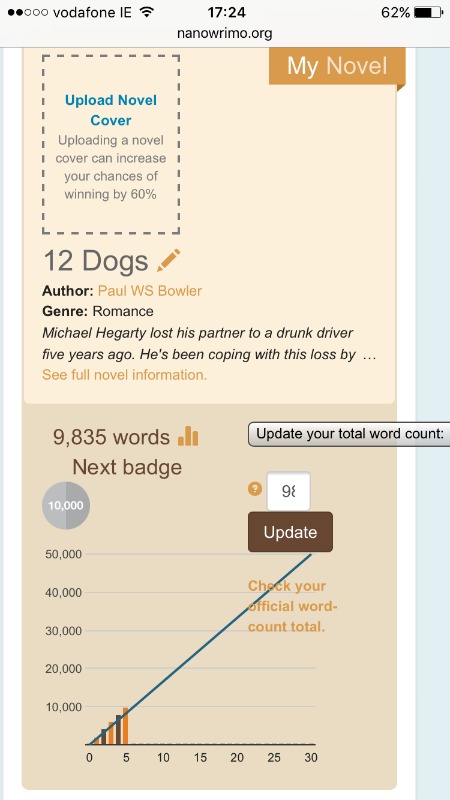 Haven’t been able to do a lot reading this week. I’m taking part in the annual NaNoWriMo madness. This is a competition where participants are expected to write a 50,000 word novel in a month. For people like me that means completing a 50,000 word first draft. More accomplished writers might be able to manage more than a rough draft but I certainly don’t want to do anymore than get that draft done.

The problem I have with first drafts is that I can’t switch off that part of my brain that imagines it being read. A first draft should be for the writer alone. This ridiculous deadline makes it easier for me to ignore my worries about unfleshed out ideas, poor grammar, plot holes and weird inconsistencies.

I’m four days in and still full of enthusiasm. I just hope that enthusiasm lasts.

Again there are US presidential election and Brexit nonsense to read. Thank Gandalf the election will be over by next week. No doubt all the news will end then. I’ve also included a piece about pensions. It’s a bit right wing in tone but the issue remains important. Especially for someone like me as I can’t help thinking it will have all fallen apart by the time I’m due to retire, even if I have to wait until I’m 70.

Finally do please consider checking out my one and only completed novel over on Amazon.

“And the principle means the tabloids used to obtain this result was the “endless xenophobic nudges of its immigration coverage.” Of course these newspapers will say they were just expressing their readers fears, but when they are reduced to making up stories to encourage this fear any claim to innocence becomes very hollow. Fueling anti-immigration feeling was their version of a southern strategy, and Brexit saw its culmination.” Brexit and neoliberalism

“Demonology aside, most conservatives and Republicans—and yes, many non-conservatives and non-Republicans—will recognize many of the factual predicates of the critiques of Hillary Clinton’s methods and character. The Clintons sold access to a present secretary of state and a potential future president in pursuit of personal wealth. Hillary Clinton does indeed seem a suspicious and vindictive personality. For sure, a President Clinton will want to spend and regulate even more than the Obama administration has done. Like Henny Youngman, however, the voter must always ask: compared to what?” The Conservative Case for Voting for Clinton

“Contemporary sexism is mainly ambivalent in nature. We often hold both positive (benevolent) and negative (hostile) attitudes to women (and men). Hostile sexism involves old-fashioned and overt negativity towards women, whereby they are perceived as wanting to control men. It reflects beliefs that men should have more power than women, that women may use their sexuality to benefit from men’s higher status and that women are less competent than men.” Why do so many women oppose feminism? A psychologist explains

“When I visit high schools with my novels, I always encourage teenage girls to call themselves feminists because I believe all girls need feminism. They need it to safeguard the rights they already have and those inequalities still not fought. I have always been a feminist, but it’s from feminists that I’ve faced my harshest criticisms.” Call yourself a feminist?

“I am a veteran of 3 Caesarean Sections. When I read the phrase “grievous assault”, my blood ran cold and my uterus contracted because that’s how I felt. Assaulted. I was not too posh or too old to push. During my first labour I was told that if I didn’t push the baby out by 5.30pm the doctor was going to come in and give me a section.  I was lying on a bed strapped to a heart monitor with a clock ticking down the next 30 minutes. I was tired, drugged and scared and was in no state to make a stand.  I consented to a section.” Papa Don’t Preach, Repeal the 8th

“The plot line of the episode is not tied to anything in the history of Beverly’s character. Nor does it depend on her being a doctor or a woman. In theory, any of the major characters could have been the star of this episode. But it is not at all a coincidence that it is Beverly — a woman, a healer, a mother, and Picard’s occasional love interest — who lives out this story.” Star Trek’s Feminist Statement: Believe Women

“Prof O’Malley-Dunlop says the law should set out clearly the circumstances where consent cannot be given. This would include cases where the complainant was asleep or otherwise unconscious, or too affected by alcohol or drugs to freely agree to sexual activity; while Anne Sexton says a YouTube video, Tea Consent, makes a comical but accurate analogy between making someone a cup of tea and having sex with them.” It’s time to talk about consent

“The bizarre attack on Max Mosley – the third spread Pendlebury has penned about him this year – was motivated by the former Formula One bosses’ support for Impress, the new press regulatory body. Pendlebury did not mention that the pre-war owner of the Daily Mail, Harold Sidney Harmsworth, 1st Viscount Rothermere, was so excited by the BUF that he personally wrote a full-page editorial headlined ‘ ‘Hurrah for the Blackshirts’ in January 1934.” Revealed: The Extent of the Daily Mail’s Support for the British Union of Fascists

“Demographic aging is the social and economic equivalent of climate change: it is a problem that we all know must be addressed, but which we would rather leave for future generations to solve. The impulse to put things off for a later day is understandable, given current economic and political troubles; but when it comes to public pensions, procrastination comes at a high cost – even more so than in the case of global warming.” The Creeping Public-Pension Debacle