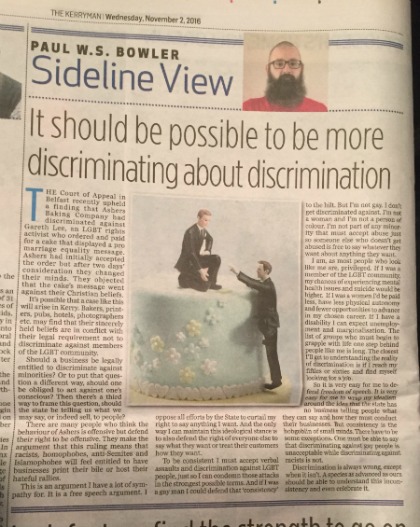 The Court of Appeal in Belfast recently upheld a finding that Ashers Baking Company had discriminated against Gareth Lee. Mr Lee is a LGBT rights activist who ordered and paid for a cake that displayed a pro marriage equality message. Ashers had initially accepted the order but after two days’ consideration they changed their minds. They objected that the cake’s message went against their Christian beliefs.

It’s possible that a case like this will arise in Kerry. Bakers, printers, pubs, hotels, photographers etc. may find that their sincerely held beliefs are in conflict with their legal requirement not to discriminate against members of the LGBT community.

Should a business be legally entitled to discriminate against minorities? Or to put that question a different way, should one be obliged to act against one’s conscious? Then there’s a third way to frame this question, should the state being telling us what we may say, or indeed sell, to people?

There are many people who think the behaviour of Ashers is offensive but defend their right to be offensive. They make the argument that this ruling means that racists, homophobes, anti-Semites and Islamophobes will feel entitled to have businesses print their bile or host their hateful rallies.

This is an argument I have a lot of sympathy for. It is a free speech argument. I oppose all efforts by the State to curtail my right to say anything I want. And the only way I can maintain this ideological stance is to also defend the right of everyone else to say what they want or treat their customers how they want.

To be consistent I must accept verbal assaults and discrimination against LGBT people, just so I can condemn those attacks in the strongest possible terms. And if I was a gay man I could defend that ‘consistency’ to the hilt. But I’m not gay. I don’t get discriminated against. I’m not a woman and I’m not a person of colour. I’m not part of any minority that must accept abuse just so someone else who doesn’t get abused is free to say whatever they want about anything they want.

I am, as most people who look like me are, privileged. If I was a member of the LGBT community, my chances of experiencing mental health issues and suicide would be higher.  If I was a women I‘d be paid less, have less physical autonomy and fewer opportunities to advance in my chosen career. If I have a disability I can expect unemployment and marginalisation. The list of groups who must begin to grapple with life one step behind people like me is long. The closest I’ll get to understanding the reality of discrimination is if I reach my fifties or sixties and find myself looking for a job.

So it is very easy for me to defend freedom of speech. It is very easy for me to wrap my idealism around the idea that the state has no business telling people what they can say and how they must conduct their businesses. But consistency is the hobgoblin of small minds. There have to be some exceptions. One must be able to say that discriminating against gay people is unacceptable while discriminating against racists is not.

Discrimination is always wrong, except when it isn’t. A species as advanced as ours should be able to understand this inconsistency and even celebrate it.