Column: I get the point about speeding…just don’t give me the points 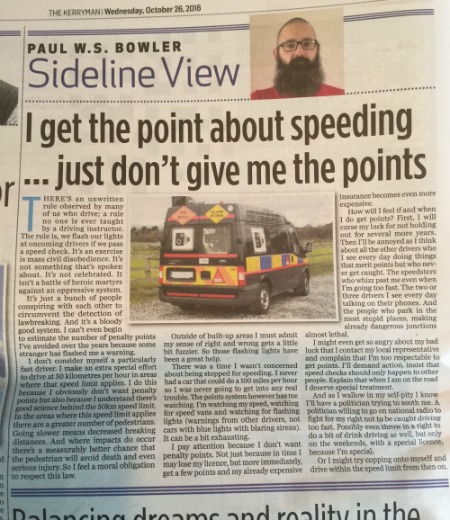 There’s an unwritten rule observed by many of us who drive; a rule no one is ever taught by a driving instructor. The rule is, we flash our lights at oncoming drivers if we pass a speed check. It’s an exercise is mass civil disobedience. It’s not something that’s spoken about. It’s not celebrated. It isn’t a battle of heroic martyrs against an oppressive system.

It’s just a bunch of people conspiring with each other to circumvent the detection of lawbreaking. And it’s a bloody good system. I can’t even begin to estimate to number of points I’ve avoided over the years because some stranger has flashed me a warning.

I don’t consider myself a particularly fast driver. I make an extra special effort to drive at 50 kilometres per hour in areas where that speed limit applies. I do this because I obviously don’t want points but also because I understand there’s good science behind the 50km speed limit. In the areas where this speed limit applies there are a greater number of pedestrians. Going slower means decreased breaking distances. And where impacts do occur there’s a measurably better chance that the pedestrian will avoid death and even serious injury. So I feel a moral obligation to respect this law.

Outside of built up areas I must admit my sense of right and wrong gets a little bit fuzzier. So those flashing lights have been a great help.

There was a time I wasn’t concerned about being stopped for speeding. I never had a car that could do 100 miles per hour so I was never going to get into any real trouble. The points system however has me watching. I’m watching my speed, watching for speed vans and watching for flashing lights (warnings from other drivers, not blue lights with blaring sirens). It can be a bit exhausting.

I pay attention because I don’t want points. Not just because in time I may lose my licence, but more immediately, get a few points and my already expensive insurance becomes even more expensive.

How will I feel if and when I do get points? First, I will curse my luck for not holding out for several more years. Then I’ll be annoyed as I think about all the other drivers, who I see every day, doing things that merit points but who never get caught. The speedsters who whizz past me, even when I’m going too fast. The two or three drivers I see every day talking on their phones. And the people who park in the most stupid places, making already dangerous junctions almost lethal.

I might even get so angry about my bad luck that I contact my local representative and complain that I’m too respectable to get points. I’ll demand action, insist that speed checks should only happen to other people. Explain that when I am on the road I deserve special treatment.

And as I wallow in my self-pity I know I’ll have a politician trying to sooth me. A politician willing to go on national radio to fight for my right not to be caught driving too fast. Possibly even throw in a right to do a bit of drink driving as well, but only on the weekends, with a special licence, because I’m special.

Or I might try copping onto myself and drive within the speed limit from then on.