Final Column: A walk on the wild side amid Tralee’s urban cacophony 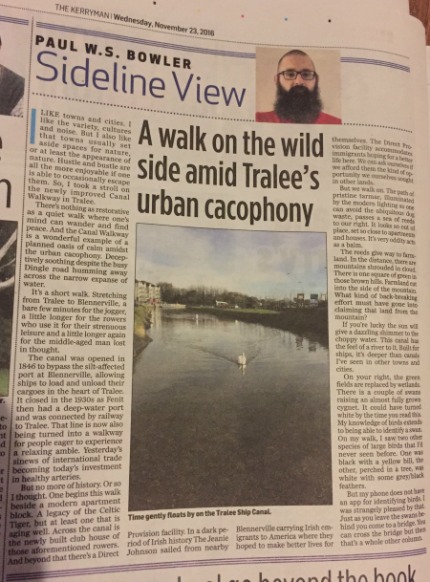 This is my final column for The Kerryman. There was a change made to this piece which I cannot stand over.  I will highlight the piece that was added and I’ll include what it replaced. The issue is the use of the word immigrant to describe asylum seekers. I was unable to convince The Kerryman that this was fundamentally inaccurate.

I like towns and cities. I like the variety, cultures and noise. But I also like that towns usually set aside spaces for nature, or at least the appearance of nature. Hustle and bustle are all the more enjoyable if one is able to occasionally escape them. So, I took a stroll on the newly improved Canal Walkway in Tralee.

There’s nothing as restorative as a quiet walk where one’s mind can wander and find peace. And the Canal Walkway is a wonderful example of a planned oasis of calm amidst the urban cacophony. Deceptively soothing despite the busy Dingle road humming away across the narrow expanse of water.

It’s a short walk. Stretching from Tralee to Blennerville, a bare few minutes for the jogger, a little longer for the rowers that use it for their strenuous leisure and a little longer again for the middle-aged man lost in thought.

The canal was opened in 1846 to bypass the silt affected port at Blennerville, allowing ships to load and unload their cargoes in the heart of Tralee. It closed in 1930s as Fenit then had a deep-water port and was connected by railway to Tralee. That line is now also being turned into a walkway for people eager to experience a relaxing amble. Yesterday’s sinews of international trade becoming today’s investment in healthy arteries.

But no more of history. Or so I thought. One begins this walk beside a modern apartment block. A legacy of the Tiger, but at least one that is aging well. Across the canal is the newly built club house of those aforementioned rowers. And beyond it there’s a Direct Provision facility. In a dark period of Irish history The Jeanie Johnson sailed from nearby Blennerville carrying emigrants to America where they hoped to make better lives for themselves. The Direct Provision facility accommodates immigrants hoping for a better life here. We can ask ourselves if we afford them the kind of opportunities we ourselves sought in other lands. (What I’d written: A reminder of a time when we warehoused human beings instead of dealing with them. Hidden away while generating profit for the warehousers. Sometimes history is just the same story repeating itself.)

But we walk on. The path of pristine tarmac, illuminated by the modern lighting so one can avoid the ubiquitous dog waste, passes a sea of reeds to our right. It looks so out of place, set so close to apartments and houses. It’s very oddity acts as a balm.

The reeds give way to farmland. In the distance, there are mountains shrouded in cloud. There is one square of green in those brown hills. Farmland cut into the side of the mountain. What kind of back-breaking effort must have gone into claiming that land from the mountain?

If you’re lucky the sun will give a dazzling shimmer to the choppy water. This canal has the feel of a river to it. Built for ships it’s deeper than canals I’ve seen in other towns and cities.

On your right, the green fields are replaced by wetlands. There is a couple of swans raising an almost fully grown cygnet. It could have turned white by the time you read this. My knowledge of birds extends to being able to identify a swan. On my walk, I saw two other species of large birds that I’d never seen before. One was black with a yellow bill, the other, perched in a tree, was white with some grey/black feathers.

But my phone does not have an app for identifying birds. I was strangely pleased by that. Just as you leave the swans behind you come to a bridge. You can cross the bridge but then that’s a whole other column.