Column: Predjudice thrives in a new era of brute survival 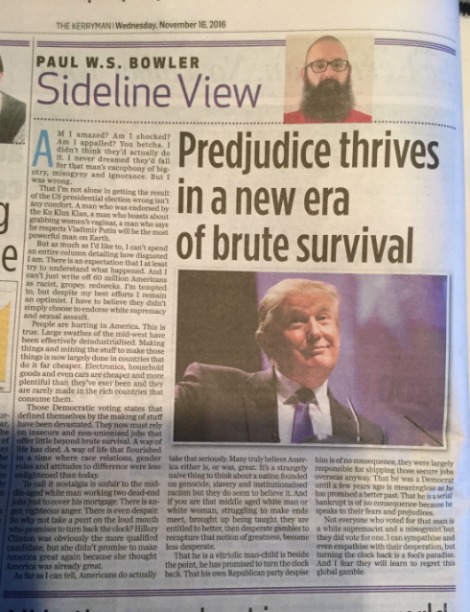 Am I amazed? Am I shocked? Am I appalled? You betcha. I didn’t think they’d actually do it. I never dreamed they’d fall for that man’s cacophony of bigotry, misogyny and ignorance. But I was wrong. That I’m not alone in getting the result of the US presidential election wrong isn’t any comfort. A man who was endorsed by the Ku Klux Klan, a man who boasts about grabbing women’s vaginas, a man who says he respects Vladimir Putin will be the most powerful man on Earth.

But as much as I’d like to, I can’t spend an entire column detailing how disgusted I am. There is an expectation that I at least try to understand what happened. And I can’t just write off 60 million Americans as racist, gropey, rednecks. I’m tempted to, but despite my best efforts I remain an optimist. I have to believe they didn’t simply choose to endorse white supremacy and sexual assault.

People are hurting in America. This is true. Large swathes of the mid-west have been effectively deindustrialised. Making things and mining the stuff to make those things is now largely done in countries that do it far cheaper. Electronics, household goods and even cars are cheaper and more plentiful than they’ve ever been and they are rarely made in the rich countries that consume them.

Those Democratic voting states that defined themselves by the making of stuff have been devastated. They now must rely on insecure and non-unionised jobs that offer little beyond brute survival. A way of life has died. A way of life that flourished in a time where race relations, gender roles and attitudes to difference were less enlightened than today.

To call it nostalgia is unfair to the middle-aged white man working two dead-end jobs just to cover his mortgage. There is anger, righteous anger. There is even despair. So why not take a punt on the loud mouth who promises to turn back the clock? Hillary Clinton was obviously the more qualified candidate, but she didn’t promise to make America great again because she thought America was already great.

As far as I can tell, Americans do actually take that seriously. Many truly believe America either is, or was, great. It’s a strangely naive thing to think about a nation founded on genocide, slavery and institutionalised racism but they do seem to believe it. And if you are that middle aged white man or white woman, struggling to make ends meet, brought up being taught they are entitled to better, then desperate gambles to recapture that notion of greatness, become less desperate.

That he is a vitriolic man-child is beside the point, he has promised to turn the clock back. That his own Republican party despise him is of no consequence, they were largely responsible for shipping those secure jobs overseas anyway. That he was a Democrat until a few years ago is meaningless as he has promised a better past. That he is a serial bankrupt is of no consequence because he speaks to their fears and prejudices.

Not everyone who voted for that man is a white supremacist and a misogynist but they did vote for one. I can sympathise and even empathise with their desperation, but turning the clock back is a fool’s paradise. And I fear they will learn to regret this global gamble.