Column: Choosing between the disliked and the dangerous 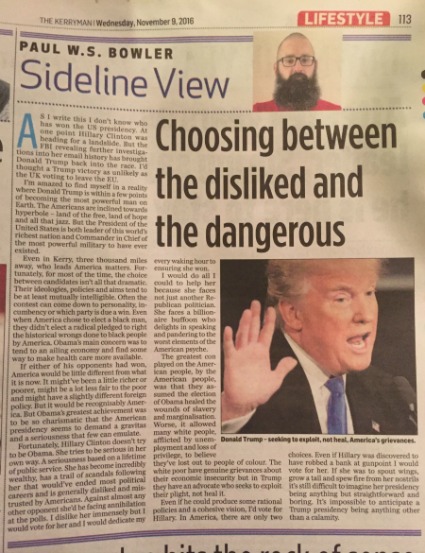 As I write this I don’t know who has won the US presidency. At one point Hillary Clinton was heading for a landslide. But the FBI revealing further investigations into her email history has brought Donald Trump back into the race. I’d thought a Trump victory as unlikely as the UK voting to leave the EU.

I’m amazed to find myself in a reality where Donald Trump is within a few points of becoming the most powerful man on Earth. The Americans are inclined towards hyperbole. Land of free, land of hope and all that jazz. But the President of the United States is both leader of this world’s richest nation and Commander in Chief of the most powerful military to have ever existed.

Even in Kerry, three thousand miles away, who leads America matters. Fortunately, for most of the time, the choice between candidates isn’t all that dramatic. Their ideologies, policies and aims tend to be at least mutually intelligible. Often the contest can come down to personality, incumbency or which party is due a win. Even when America chose to elect a black man, they didn’t elect a radical pledged to right the historical wrongs done to black people by America. Obama’s main concern was to tend to an ailing economy and find some way to make health care more available.

If either of his opponents had won, America would be little different from what it is now. It might’ve been a little richer or poorer, might be a lot less fair to the poor and might have a slightly different foreign policy. But it would be recognisably America. But Obama’s greatest achievement was to be so charismatic that the American presidency seems to demand a gravitas and a seriousness that few can emulate.

Fortunately, Hillary Clinton doesn’t try to be Obama. She tries to be serious in her own way. A seriousness based on a lifetime of public service. She has become incredibly wealthy, has a trail of scandals following her that would’ve ended most political careers and is generally disliked and mistrusted by Americans. Against almost any other opponent she’d be facing annihilation at the polls. I dislike her immensely but I would vote for her and I would dedicate my every waking hour to ensuring she won.

I would do all I could to help her because she faces not just another Republican politician. She faces a billionaire buffoon who delights in speaking and pandering to the worst elements of the American psyche.

The greatest con played on the American people, by the American people, was that they assumed the election of Obama healed the wounds of slavery and marginalisation. Worse, it allowed many white people, afflicted by unemployment and loss of privilege, to believe they’ve lost out to people of colour. The white poor have genuine grievances about their economic insecurity but in Trump they have an advocate who seeks to exploit their plight, not heal it.

Even if he could produce some rational policies and a cohesive vision, I’d vote for Hillary. In America, there are only two choices. Even if Hillary was discovered to have robbed a bank at gunpoint I would vote for her. If she was to spout wings, grow a tail and spew fire from her nostrils it’s still difficult to imagine her presidency being anything but straightforward and boring. It’s impossible to anticipate a Trump presidency being anything other than a calamity.