Column: Information super-highway puts us on a fast lane to the ‘post truth era’ 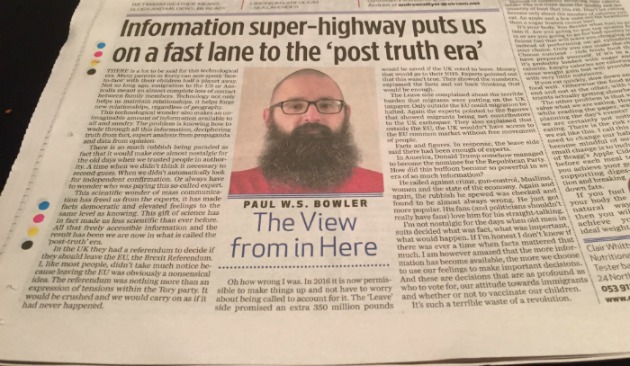 There is a lot to be said for this technological era. Many parents in Kerry can now speak ‘face-to-face’ with their children half a planet away. Not so long ago, emigration to the US or Australia meant an almost complete loss of contact between family members. Technology not only helps us maintain relationships, it helps forge new relationships, regardless of geography.

This technological wonder also makes an unimaginable amount of information available to all and sundry. The problem is knowing how to wade through all this information, deciphering truth from fact, expert analysis from propaganda and data from opinion.

There is so much rubbish being paraded as fact that it would make one almost nostalgic for the old days when we trusted people in authority. A time when we didn’t think it necessary to second-guess. When we didn’t automatically look for independent confirmation. Or always have to wonder who was paying this so-called expert.

This scientific wonder of mass communication has freed us from the experts, it has made facts, democratic and elevated feelings to the same level as knowing. This gift of science has in fact made us less scientific than ever before. All that freely accessible information and the result has been we are now in what is called the ‘post-truth’ era.

In the UK they had a referendum to decide if they should leave the EU, the Brexit Referendum. I, like most people, didn’t take much notice because leaving the EU was obviously a nonsensical idea. The referendum was nothing more than an expression of tensions within the Tory party. It would be crushed and we would carry on as if it had never happened.

Oh how wrong I was. In 2016 it is now permissible to make things up and not have to worry about being called to account for it. The ‘Leave’ side promised an extra 350 million pound would be saved if the UK voted to leave. Money that would go to their NHS. Experts pointed out that this wasn’t true. They showed the numbers, explained the facts and sat back thinking that would be enough.

The Leave side complained about the terrible burden that migrants were putting on the UK tax-payer. Only outside the EU could migration be halted. Again the experts pointed to the figures that showed migrants being net contributors to the UK exchequer. They also explained that outside the EU, the UK wouldn’t have access to the EU common market without free movement of people.

Facts and figures. In response, the leave side said there had been enough of experts.

In America, Donald Trump somehow managed to become the nominee for the Republican Party. How did this buffoon become so powerful in an era of so much information?

He railed against crime, gun-control, Muslims, women and the state of the economy. Again and again, the rubbish he spewed was checked and found to be almost always wrong. He just got more popular. His fans (and politicians shouldn’t really have fans) love him for his straight-talking.

I’m not nostalgic for the days when old men in suits decided what was fact, what was important, what would happen. If I’m honest I don’t know if there was ever time when facts ever mattered that much. I am however amazed that the more information has become available, the more we choose to use our feelings to make important decisions. And these are decisions are as profound as who to vote for, our attitude towards immigrants and whether or not to vaccinate our children.

It’s such a terrible waste of a revolution.