Column: Burkini ban is an insult to freedom 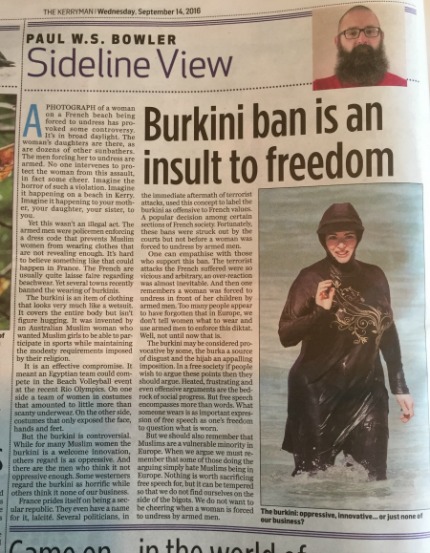 A photograph of a woman on a French beach being forced to undress has provoked some controversy. It’s in broad daylight. The woman’s daughters are there, as are dozens of other sunbathers. The men forcing her to undress are armed. No one intervenes to protect the woman from this assault, in fact some cheer. Imagine the horror of such a violation. Imagine it happening on a beach in Kerry. Imagine it happening to your mother, your daughter, your sister, to you.

Yet this wasn’t an illegal act. The armed men were policemen enforcing a dress code that prevents Muslim women from wearing clothes that are not revealing enough. It’s hard to believe something like that could happen in France. The French are usually quite laisse faire regarding beachwear. Yet several towns recently banned the wearing of burkinis.

The burkini is an item of clothing that looks very much like a wetsuit. It covers the entire body but isn’t figure hugging. It was invented by an Australian Muslim woman who wanted Muslim girls to be able to participate in sports while maintaining the modesty requirements imposed by their religion.

It is an effective compromise. It meant an Egyptian team could compete in the Beach Volleyball event at the recent Rio Olympics. On one side a team of women in costumes that amounted to little more than scanty underwear. On the other side, costumes that only exposed the face, hands and feet.

France prides itself on being a secular republic. They even have a name for it, laïcité. Several politicians, in the immediate aftermath of terrorist attacks, used this concept to label the burkini as offensive to French values. A popular decision among certain sections of French society. Fortunately, these bans were struck out by the courts but not before a woman was forced to undress by armed men.

One can empathise with those who support this ban. The terrorist attacks the French suffered were so vicious and arbitrary, an over-reaction was almost inevitable. And then one remembers a woman was forced to undress in front of her children by armed men. Too many people appear to have forgotten that in Europe, we don’t tell women what to wear and use armed men to enforce this diktat. Well, not until now that is.

The burkini may be considered provocative by the some, the burka a source of disgust and the hijab an appalling imposition. In a free society if people wish to argue these points then they should argue. Heated, frustrating and even offensive arguments are the bedrock of social progress. But free speech encompasses more than words. What someone wears is as important expression of free speech as one’s freedom to question what is worn.

But we should also remember that Muslims are a vulnerable minority in Europe. When we argue we must remember that some of those doing the arguing simply hate Muslims being in Europe. Nothing is worth sacrificing free speech for, but it can be tempered so that we do not find ourselves on the side of the bigots. We do not want to be cheering when a woman is forced to undress by armed men.