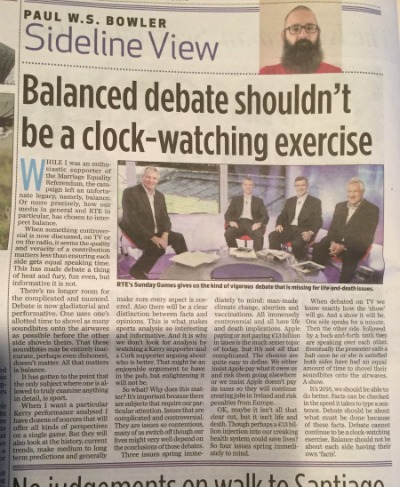 While I was an enthusiastic supporter of the Marriage Equality referendum, the campaign left an unfortunate legacy, namely, balance. Or more precisely, how our media in general and RTE in particular, has chosen to interpret balance.

When something controversial is now discussed, on TV or on the radio, the quality and veracity of a contribution matters less than ensuring each side gets equal speaking time. This has made debate a thing of heat and fury, fun even, but informative it is not.

There’s no longer room for the complicated and nuanced. Debate is now gladiatorial and performative. One uses one’s allotted time to shovel as many soundbites onto the airwaves as possible before the other side shovels theirs. That these soundbites may be entirely inaccurate, perhaps even dishonest, doesn’t matter. All that matters is balance.

It has gotten to the point that the only subject where one is allowed to truly examine anything in detail, is sport.

When I want a particular Kerry performance analysed I have dozens of sources that will offer all kinds of perspectives on a single game. But they will also look at the history, current trends, make medium to long term predictions and generally make sure every aspect is covered. Also there will be a clear distinction between facts and opinions. This is what makes sports analysis so interesting and informative. And it is why we don’t look for analysis by watching a Kerry supporter and a Cork supporter arguing about who is better. That might be an enjoyable argument to have in the pub, but enlightening it will not be.

So what? Why does this matter? It’s important because there are subjects that require our particular attention. Issues that are complicated and controversial. They are issues so contentious, many of us switch off though our lives might very well depend on the conclusions of those debates.

Three issues spring immediately to mind: man-made climate change, abortion and vaccinations. All immensely controversial and all have life and death implications. Apple paying or not paying €13 billion in taxes is the much sexier topic of today, but it’s not all that complicated. The choices are quite easy to define. We either insist Apple pay what it owes us and risk them going elsewhere or we insist Apple doesn’t pay its taxes so they will continue creating jobs in Ireland and risk penalties from Europe.

OK, maybe it isn’t all that clear cut, but it isn’t life and death. Though perhaps a €13 billion injection into our creaking health system could save lives? So four issues spring immediately to mind.

When debated on TV we know exactly how the ‘show’ will go. And a show it will be. One side speaks for a minute. Then the other side. Followed by a back and forth until they are speaking over each other. Eventually the presenter calls a halt once he or she is satisfied both sides have had an equal amount of time to shovel their soundbites onto the airwaves. A show.

It’s 2016, we should be able to do better. Facts can be checked in the speed it takes to type a sentence. Debate should be about what must be done because of these facts. Debate cannot continue to be a clock watching exercise. Balance should not be about each side having their own ‘facts’.