After finding horse DNA in cheap burgers, we may find ourselves taking magnifying glasses when we go shopping. Anything to see the small print, showing every ingredient being squashed into products we hope to be good quality food. We may also need dictionaries and degrees in biology and chemistry. We will do this because, though this recession is squeezing the life and joy out of our existence, we still retain enough self-respect to expect to be told honestly what we are eating.

Unfortunately we are less demanding about what our politicians are selling us. We appear content with having all kinds of offal and dodgy matter shoveled down our throats. And we say thank you for it as well. And say Sir and Minister and three bags full too. Never do we take the magnifying glass to these suspect products and examine closely what the ingredients really are.

Let’s for example look at our Kerry County Council. 27 individuals, who have managed to make them and us, famous nationally and internationally for voting in support of drink-driving by permit. That Kerry is a laughing stock at the moment is not something I’m unduly bothered by. Politicians and scandals are by their very natures, frequent and easily forgotten. So the laughter we must endure will quickly pass.

Five councillors (not all from the pub trade), voted to call on the Minister for Justice to allow drink-driving by permit. Three voted against. Seven abstained. Twelve weren’t there. Last year five people died on the roads of Kerry. In 2006 it was 21. In the last three years, the number of people failing the breathalyzer test has almost halved. We increasingly see drink-driving as an immoral act. Since politicians began to take drink-driving seriously, they have, to their eternal credit, managed to save lives. Hundreds nationally and dozens in Kerry. Five councillors, now wish to snatch defeat from the jaws of that victory.

Look closer though. These councillors, have no power to make this proposal anything other than a witless wish. No Minister in any government, would ever entertain a law permitting certain people to drink and drive. What we seem to have, are five councillors, being allowed to get a huge amount of publicity for themselves, through this cheap stunt.

And as regrettable as the behaviour of these five councillors is, it is the seven who abstained and the twelve who weren’t there, who allowed Kerry to announce to the world, that drink-driving is tolerated in Kerry by our politicians. I just hope that the five councilors (who are not all involved in the pub trade), will volunteer to change our “Welcome to Kerry‘ signs, so that they say; “Welcome to Kerry, stay off the roads at night. Drink-driving officially tolerated.” After all, we wouldn’t want to mislabel our county. 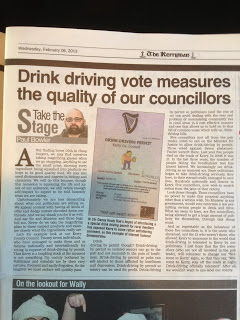