February was once a difficult month for the sellers of chocolate, greeting cards, flowers and decorations. Broke from the excesses of Christmas, we would throw our empty purses and wallets into a kitchen drawer and not expect to need them again till Easter or Saint Patrick’s Day. Then our American cousins happened upon a wonderful caper to extend the spending through the bleak poverty of February. They invented Valentine’s Day.

And no, this isn’t one of those ‘I’ve no partner so I hate Valentine’s Day’ articles. I have a partner. Honestly. And while I can be cynical, I really am a romantic. I will see my other half tomorrow and there will be hugs and knowing smiles, that acknowledge that it is a day we are expected to be all lovey-dovey.

There will be no gifts or cards though. Tomorrow is not something I choose to celebrate, and it isn’t because it’s a bogus holiday, but because I will have been celebrating something much more important. Tuesday was the 12 February and it was Darwin’s Day. The day on which we mark the birth, in 1809, of the man who, more than any other person, has shaped our understanding of our species. It’s the day we remember the great Charles Darwin.

It was Darwin who first explained that all life on this planet has a common ancestry. That the amazing diversity of life we see all round us, stems from the same primordial soup. We now know that it took our species millions of years to evolve into the world-dominating bipedal mammals we have becoem.

He developed his theory of Evolution, in a time before genetics were understood and before we knew just how old this planet is. (Approximately 4.5 billions years) Science has unlocked more and more wonders since Darwin’s time. We now know that there have been almost 30 different human species, since we diverged from the ancestor we share with chimpanzees, about 6 million years ago. All of them extinct, except for us.

Most scientists agree that our species originated in Africa, and that all of us outside of Africa descend from one small tribe of Africans who crossed into Asia about 100,000 years ago. One of the reasons they think this, is how remarkably similar, on a genetic level, all non-Africans are to each other. While there is a huge amount of genetic diversity in a relatively small area of East Africa.

All these amazing discoveries began with Darwin’s, On the Origin of the Species, published in 1859. Of course his theory was, and is controversial, though no credible scientist questions Evolution anymore, as there is just too much evidence.

We once thought this planet was about 7000 years old. It is impossible to think such a thing and be from Kerry. Could a peninsula such as Beara, be cut from solid rock so quickly? Could the boulders that were pulverised to make the sand on Banna Beach, be made so fast? Did the rivers of ice that drove a path through a mountain to make The Gap of Dunloe not need time? Does anyone think it took mere millennia for the waves to create the rugged majesty of Slea Head?

That which is most beautiful in Kerry appears timeless and our existence in comparison, fleeting. So perhaps today, we should combine Darwin and Valentine. Visit somewhere beautiful, a very easy thing to do in Kerry. And just revel in the splendour of our ancient landscape and appreciate evolution for giving us the ability to perceive that beauty. 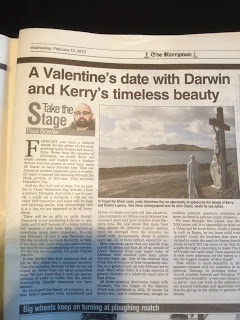