There were some interesting things we learned from the 2011 Census. We now know the population of Kerry is just over 140 000. That’s a bit less than two full Croke Parks. There’s a lot of us, but not a huge amount of us. The Census also told us that about 85% of Kerry people, identify as Roman Catholic. Meaning over 20 thousand of us, don’t identify as Roman Catholic.

It is not an insignificant number. A bit more than can be held by Austen Stack Park, in Tralee. The trouble is, these 20 thousand people don’t all live in one part of Kerry. They are spread all over this huge county. This far flung county, with just one national school that caters to those who would prefer their children to not be educated in a Roman Catholic Primary School.

That school in Tralee, is called an Educate Together School and is part of a slowly growing nationwide system of Primary schools that seeks to educate children of all faiths and none, in a shared environment. The school in Tralee however, cannot serve the needs of children in large parts of South, West and North Kerry.

Over 90% of Primary Schools are run by the Catholic Church. A core value of these Catholic schools is to not only inform children about Catholic values and dogmas, but to take an active role in raising children as Catholics. Nothing wrong with that, except that numbers have recently begun to change.

There are now more Catholic Schools than needed by Catholics. To this end, the Minister for Education Ruairi Quinn began a process of consulting parents about what kind of schools they would prefer. If a significant desire for change is indicated in a particular area, then some Catholic Primary schools would convert to different models, like that of Educate Together. Initially Minister Quinn thought 50% of school would change over, but considering the available data, this seems a bit out of step with the actual level of demand indicated.

As part of that process of asking parents what they want, the parents of Killarney are being given the chance to participate in a survey about their preferred school model. Any parent of a child of primary school age and younger can take part in this survey by visiting www.education.ie. It’s very important that a large number of parents take part in the survey, as it will be too easy to dismiss the results as unrepresentative, if the ‘turnout’ is low.

If enough interest is shown, then perhaps the parents of Kerry will be fortunate enough to gain some options regarding the education of their children. For the last ten years, Tralee Educate Together has been a pioneer of that additional choice. It offers the exact same curriculum as any other Primary school, but in place of the large chunks of the day given over to Catholic instruction and ethos, it strives to teach children about Judaism, Christianity, Islam, Buddhism, Sikhism and Hinduism.

This is not to say that the religious obligations of the various faiths that attend (including Catholics) are neglected. No, instead the emphasis is put on parental responsibility and action. For example, First Holy Communion and Confirmation work is done by a parent group, working outside school hours. I can’t think of a more affirming experience of one’s religion, than the active participation of one’s parents in sacramental instruction as well as party planning.

Kerry has changed and is continuing to change. Even asking parents what they want, instead of telling them just what they’ll have to make do with, is different. I hope the parents of Killarney will embrace this opportunity to have their voice and the voice of Kerry heard. 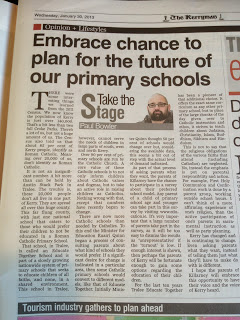