Column: The knives are out for our heroes 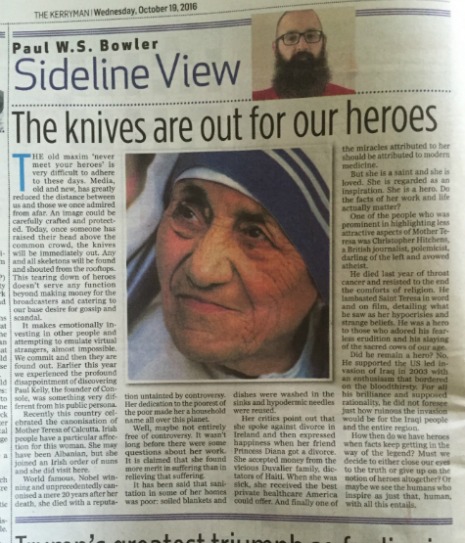 The old maxim ‘never meet your heroes’ is very difficult to adhere to these days. Media, old and new, has greatly reduced the distance between us and those we once admired from afar. An image could be carefully crafted and protected. Today, once someone has raised their head above the common crowd, the knives will be immediately out. Any and all skeletons will be found and shouted from the rooftops. This tearing down of heroes doesn’t serve any function beyond making money for the broadcasters and catering to our base desire for gossip and scandal.

It makes emotionally investing in other people and attempting to emulate virtual strangers, almost impossible. We commit and then they are found out. Earlier this year we experienced the profound disappointment of discovering Paul Kelly, the founder of Console, was something very different from his public persona.

Recently this country celebrated the canonisation of Mother Teresa of Calcutta. Irish people have a particular affection for this woman. She may have been Albanian, but she joined an Irish order of nuns and she did visit here.

World famous, Nobel winning and unprecedentedly sainted a mere 20 years after her death. She died with a reputation untainted by scandal or controversy. Her dedication to the poorest of the poor made her a household name all over this planet.

Well maybe not entirely free of controversy. There were some questions about her work. It is claimed that she found more merit in suffering than in relieving that suffering. It is has been said sanitation in some of her homes was poor: soiled blankets and dishes were washed in the sinks and hypodermic needles were reused. Her critics point out that she spoke against divorce in Ireland and then expressed happiness when her friend Princess Diana got a divorce.

She accepted money from the vicious Duvalier family, dictators of Haiti. When she was sick, she received the best private healthcare America could offer. And finally one of the miracles attributed to her should be attributed to modern medicine.

But she is a saint and she is loved. She is regarded as an inspiration. She is a hero. Do the facts of her work and life actually matter?

One of the people who was prominent in highlighting the less attractive aspects of Mother Teresa was Christopher Hitchens. A British journalist, polemicist, darling of the left and avowed atheist.

He died last year of throat cancer and resisted to the end the questionable comforts of religion. He lambasted Saint Teresa in word and on film, detailing what he saw as her hypocrisies and strange beliefs. He was a hero to those of us who adored his fearless erudition and his slaying of the sacred cows of our age.

Did he remain a hero? No. He supported the US led invasion of Iraq in 2003 with an enthusiasm that bordered on the bloodthirsty. For all his brilliance and supposed rationality, he did not foresee just how ruinous the invasion would be for the Iraqi people and the entire region.

How then do we have heroes when facts keep getting in the way of the legend? Must we decide to either close our eyes to the truth or give up on the notion of heroes altogether? Or maybe we see the humans who inspire as just that, human, with all this entails.