Column: In Danny we trust…and never mind that talk of climate change 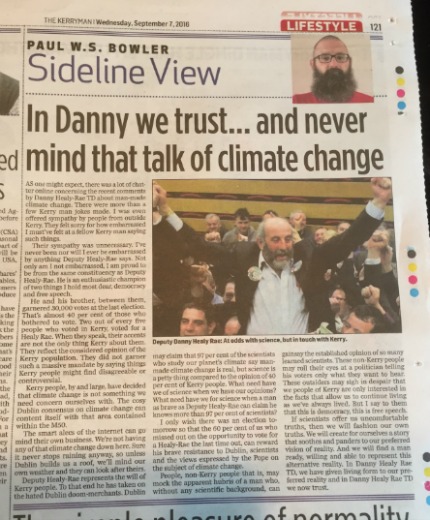 As one might expect, there was a lot of chatter online concerning the recent comments by Danny Healy-Rae TD about man-made climate change. There were more than a few Kerry man jokes made. I was even offered sympathy by people from outside Kerry. They felt sorry for how embarrassed I must’ve felt at a fellow Kerry man saying such things.

Their sympathy was unnecessary. I’ve never been nor will I ever be embarrassed by anything Deputy Healy-Rae says. Not only am I not embarrassed, I am proud to be from the same constituency as Deputy Healy-Rae. He is an enthusiastic champion of two things I hold most dear, democracy and free speech.

He and his brother, between them, garnered 30,000 votes at the last election. That’s almost 40% of those who bothered to vote. Two out of every five people in Kerry, who voted, voted for a Healy Rae. When they speak, their accents are not the only thing Kerry about them. They reflect the considered opinion of the Kerry population. They did not garner such a massive mandate by saying things Kerry people might find disagreeable or controversial.

Kerry people, by and large, have decided that climate change is not something we need concern ourselves with. The cosy Dublin consensus on climate change can content itself with that area contained within the M50.

The smart alecs of the internet can go mind their own business. We’re not having any of that Climate Change down here. Sure it never stops raining anyway, so unless Dublin builds us a roof, we’ll mind our own weather and they can look after theirs.

Deputy Healy-Rae represents the will of Kerry people. To that end he has taken on the hated Dublin doom-merchants. Dublin may claim that 97% of the scientists who study our planet’s climate say man-made climate change is real, but science is a petty thing compared to the opinion of 40% of Kerry people. What need have we of science when we have our opinions? What need have we for science when a man as brave as Deputy Healy-Rae can claim he knows more than 97% of scientists?

I only wish there was an election tomorrow so that the 60% of us who missed out on the opportunity to vote for a Healy-Rae the last time out, can reward his brave resistance to Dublin, scientists and the views expressed by the Pope on the subject of climate.

People, non-Kerry people that is, may mock the apparent hubris of a man who without any scientific background can gainsay the established opinion of so many learned scientists. These non-Kerry people may roll their eyes at a politician telling his voters only what they want to hear. These outsiders may sigh in despair that we people of Kerry are only interested in the facts that allow us to continue living as we’ve always lived. But I say to them that this is democracy, this is free speech.

If scientists offer us uncomfortable truths, then we will fashion our own truths. We will create for ourselves a story that soothes and panders to our preferred vision of reality. And we will find a man ready, willing and able to represent this alternative reality. In Danny Healy Rae TD, we have given living form to our preferred reality and in Danny Healy Rae TD we now trust.