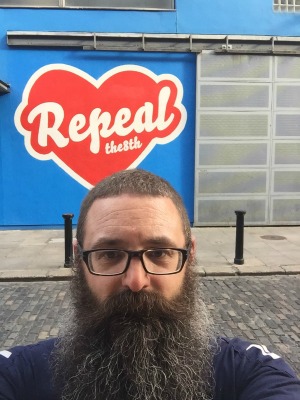 One of my ambitions for this reconditioned blog is to give a weekly summary of what I’ve been reading. It will be mostly articles, columns and blog posts that I’ve stumbled upon in the Twitterverse, but I may occasionally mention a book.

Every link in this post will be to pieces I wholly or mostly agree with. I do inhabit a bit of an ideological bubble. I’m going to have to try reading things I don’t agree with more often. Even if it’s just to confirm why I disagree with something.

If this week has any themes, it’s the issues of abortion in Ireland and the dystopia being heralded by Brexit and the rise of Trump. But there’s science and writing too.

“A Dublin doctor has spoken of the trauma of returning the foetal remains of her baby from England after Ireland’s near total ban on abortions forced her to travel to Liverpool to terminate her pregnancy.”  ‘My baby in a box’: Irish GP tells of trauma of travelling to UK for abortion

“They also lifted a photograph of Tara and photoshopped her t-shirt to read “ABORTED My Only Child.” The anti-choice argument is lost. Hence the dirty tricks

“We were told that every woman who had an abortion was racked with remorse for the rest of their lives. We were told lies. And we believed them.” I knew I would be vilified if I started to talk about other women in crisis pregnancies

“The mural is a loud, proud statement of support for repealing the 8th amendment, an amendment passed in 1983 following a referendum on abortion rights, that equates the right to life of the mother with that of the unborn” #repealthe8th – who owns public space?

“It seems we’re entering another of those stupid seasons humans impose on themselves at fairly regular intervals.” History tells us what may happen next with Brexit & Trump

“An idea can start far outside the political mainstream – flat taxes, abolish the IRS, more guns in schools, building a beautiful wall and making Mexico pay – but once it has been stated and argued for, framed and restated, it becomes thinkable.” Brexit Blues

“Student Leave voters report how, in light of recent events, they would change their vote if they could.” Brexit: For every one student who voted Leave, six voted Remain, new analysis finds

“The distributors of the anti-vaccination film Vaxxed have sent a cease-and-desist letter to an Irish advocate for autistic people who’s been speaking out against the movie.” Distributors of Anti-Vax Film Are Trying to Keep an Autistic Rights Advocate From Criticizing It

“Many thousands of years ago, on a chilly African night, a group of people gather around a fire in a cave. Using the flames, they cook their food, fashion new weapons, and warm themselves. But where there’s fire, there’s also smoke, and the smoke is giving the huddled humans a wretched cough. And in their inflamed airways, a microbe that normally lives in the soil is taking hold, changing, evolving into something new.” Was Tuberculosis Born Out of Fire?

“It struck me then how long it has been since I heard a child talk about Harry Potter. Over the last ten years or so, nearly all the conversations I’ve had on the subject have been with adults – many of them fans, many of them passionate.” Harry Potter and the Adult Appropriation

“The way I see it, all good writers have the ability to share feelings and experiences with others through imagining what it would be like to be somebody else.” Storytelling: An Exercise In Empathy