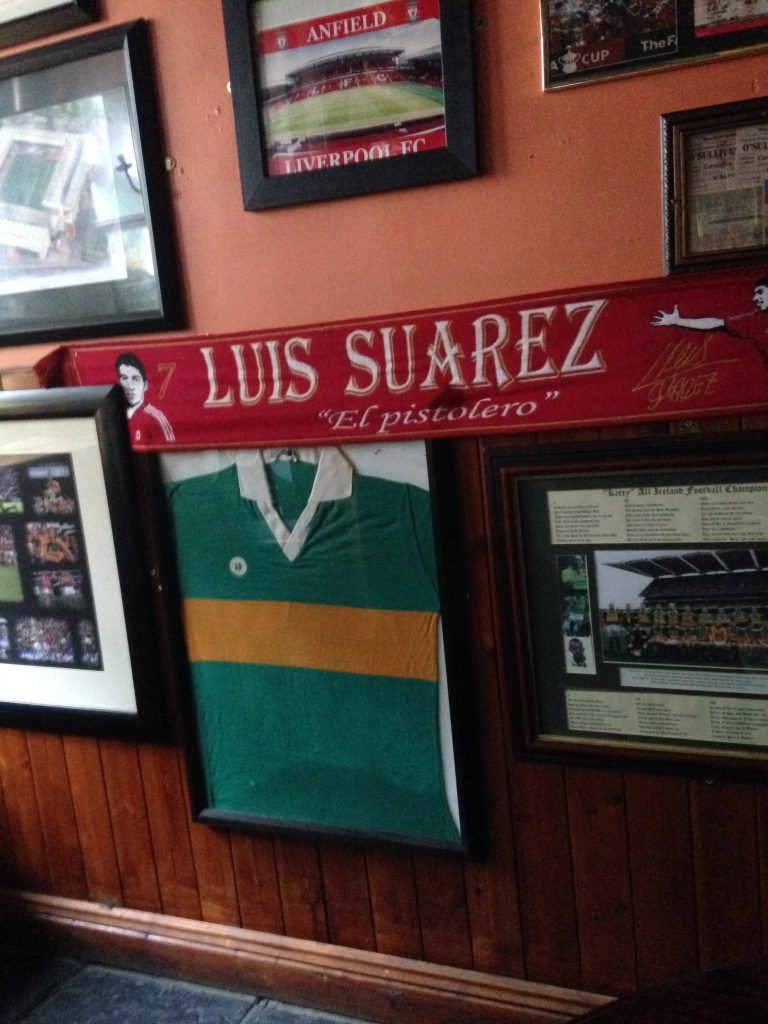 I realised something recently. I’m not enjoying Liverpool’s title challenge. This is clearly a ridiculous situation. Winning shit, or the possibility of winning shit, is a huge part of supporting a sports team at doing sports. When one follows a team as storied as Liverpool, one gets to presume that shit will be won. And won often. But, as everyone knows, Liverpool are approaching 30 years without winning the only title that really matters, the Championship. Or the Premiership as it is now known. That’s how long we’ve waited, the name of the title has changed.

In that time I’ve fallen out of and back in love with football. I even began playing again. I’ve been to college. I’ve gotten married. Grown a beard. Bought a house. Gotten fat. Got a dog. Written a book that no one read. Grown an even bigger beard. I fell truly madly deeply for Messi. He was my gateway drug back into football. Football brought me back to Liverpool.

I’m not Scouse. My grandfather was. His ashes are interred at Anfield. I like boasting about that. It confers a certain ‘legitimacy’ on my fandom. It is of course, bollox. I didn’t choose Liverpool because of my grandfather. I was born in Solihull. My father, a Kerry man, supports West Brom. I grew up in rural Kerry with Man United supporting uncles and friends. I chose Liverpool. I don’t remember why. But I did and as is the way with football one doesn’t get to change one’s mind. Not that I would anyway, but it is one of the rules. Whatever your team, that’s your team for life. I love Barcelona. But they are not my team. I’ll probably fall out of love with them once Messi hangs up his boots. Love is fleeting. One’s team is one’s team. Forever!

I’d moved away from football. I never stopped looking to see how Liverpool were doing. Football stopped being important. I’m still surprised I went years not really caring. I think my life was too busy. Working, drinking, girlfriends etc. The stuff grown-ups do, if one is willing to call people in their twenties, grown-ups. Then I saw Messi play. Saw him do things I knew to be divine.

I began to play seven-a-side. I was never any good at football but when I was young, I was fit, fast and tall. Those qualities made up for, to a certain extent, my clueless clumsiness. When I began playing again, in my late thirties, I had one advantage over my faster and fitter younger self, I understood why I was shit and what I could do to minimise my shitness.

I watched Barcelona. I read about Barcelona. Football doesn’t simply happen. It is created, with tools and imagination. Then one adds the divine spark of a Messi and something truly beautiful is born. But Barcelona are not my team.

Football is watched on two levels. There is the aesthetic appreciation. A combination of beauty, style, technique and tactics. Then there is your team. Your team can be stuffed with long-ball merchants with a penchant for ugly and miserly play, but they are your team.

But what does your team mean? A silly game played by monosyllabic millionaires really shouldn’t matter. It shouldn’t, but oh my, it really does. This seemingly irrational commitment matters. The outsourcing of one’s emotions to a bunch of rich strangers is important. It matters in so many ways.

If one lives in or is from the vicinity of a club, then that tribal affiliation makes a certain sense. Ties to a local team are understood. Proximity is a justification. When those ties move into the realm of identity (and when those doing the identifying are from thousands of miles away) things get confusing.

When speaking of Liverpool I tend to say, we. Imagine that. I’ve been in Liverpool exactly one time. We! I know I’m not the only one. We are all in this, we, we call Liverpool.

It’s the identifying with, or possibly the over identifying, that causes the addiction. And the addiction is the emotional rollercoaster we are choosing to pretend is unavoidable. What those men do on a pitch causes exquisite highs and even more exquisite lows. Oh the lows. It is the heartache of grief. The fury of quashed hope. The pain of despair. It is a stinging lash that tells you that you are alive. That you are alive. That you feel. That you are a part of something bigger. There is more than this mundane plodding from cradle to grave.

Pain, or the possibility of pain, is a huge part of supporting a sports team at sports. Yes, the highs are amazing. Istanbul. Istanbul. Istanbul. But it’s a cup. Great to win. Good for the bank balance. Good for catching the roving eyes of success hungry footballers. Losing in a final hurts. It really hurt to lose to that cock Ramos. To that uber cock Ronaldo. But Liverpool do success in Europe on the regular. And it’s a cup. One is insulated from the true depths by the knowledge that a cup requires luck. The best team doesn’t always win. It is far from a lottery, but it isn’t a league.

38 games. Home and away. Perhaps once in a generation the vagaries align to allow a Leicester to win but no more than that. Since we last won, we’ve had a few good sides. A few sides that could mount a challenge. But even with Suarez I never truly believed we would finally end the wait.

I’m not enjoying this title run because for the first time in my adult life I believe we are good enough. It terrifies me. At the time of writing, there are eleven games to go. Three months. We are top of the table. I have hope. I fear the disappointment. Will this be our last opportunity for another few decades? Will Klopp keep this team together? Will the owners keep supporting him? Will a meteor shower end all life on Earth? I support a big club, but I suffer with a small club mentality. We should be winning a couple of titles every decade. All signs point to us returning to that level. But it has been so long! I don’t know how to enjoy a race that we could win, but might not win. I support a big club, but I have a small club mentality. I have genuine hope based on facts. But nothing puts one in the way of hurt like hope. I am not enjoying this title run because I have an idea of how bad I’ll feel if we fail. I have no idea what happens if we win.