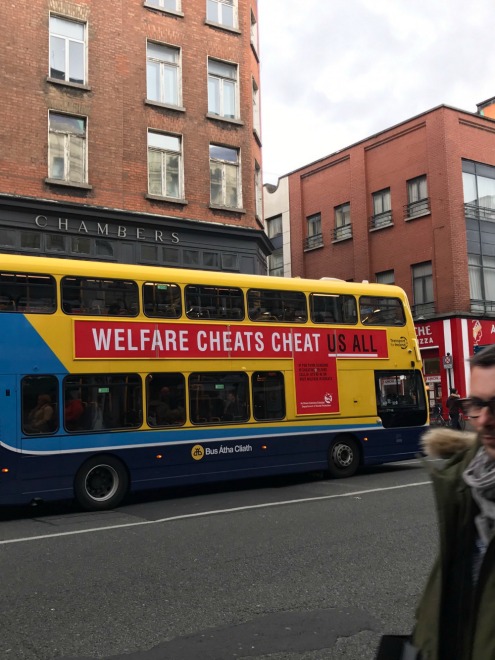 I understand why Leo Varadkar would make a big splash targeting welfare cheats. I do. In his position, I’d do the same thing. It may be transparently cynical. It may not be very original. And it will certainly enrage those who wouldn’t vote for his party anyway. But it does have a proven record in garnering those votes that someone like Varadkar wants. He’s looking to those of us in the struggling middle. The people who pay for everything. The people who get little in return. The coping classes. The squeezed middle.

We’re so important we can’t even settle on one name for us.

And it is seductive.

It may not be very original, but it doesn’t have to be. It is an appeal to a part of what we are as a species. It’s an appeal to the basest of our human instincts. It is that dog whistle calling to our very core. It is that opportunity to feel hard done by. To have someone to blame. To feel superior. A chance to hit back. Easy answers so that our frustrations can be exploited and allow us feel good about being so used.

There are a lot of us and we vote.

We humans are a social animal. On the face of it this sounds like an absolute positive. There are some downsides though. We don’t react well to being taken advantage or just thinking we are being taken advantage of. We can get very exercised by that. It’s a trait of ours that is readily exploited. Ronald Reagan became the most powerful man on this planet because of this predilection. He used the term ‘Welfare Queen’ to target the poor. He used it to target the poor with a side order of racism.

I understand why Varadkar is targeting welfare cheats. If I was in his shoes I’d be doing the exact same thing. Those of us struggling in the middle really want someone to blame. If it’s to be people who are even worse off than us, then so be it. Reagan won and he won big. He rolled back what little social welfare provision existed. Over thirty years later and there remains a visceral mistrust in America of welfare. A mistrust that is tinged with racism.

But Reagan didn’t invent this.

It worked because it is as easy to other on grounds of class as it is to for race. At the turn of the last century, British writers could dismiss the intellectual and moral fibre of the poor as readily as they did the African and Asians they ruled. Poverty, like race, was innate. The real trick was to convince the poor that this was scientific fact. That was easier done than one would expect.

It worked because, capitalism.

I say this as a capitalist. One of the foundational pillars of capitalism is aspiration. Without it, capitalism is just a very few rich people lording it over a multitude of poor and struggling folk. Without it, Ireland is just a country with 83,000 millionaires, a growing homelessness crisis and ever more children in poverty. Only faith in an ideal, no matter how far-fetched that ideal, can keep the multitude quiescent.

Aspiration is this faith.

To paraphrase a certain French warlord, every poor person carries a million-dollar idea in his or her knapsack. And no one wants higher taxes on those future millions. Yes, they’re still imaginary millions, but they’re our millions. Let’s focus on the miniscule few criminals gaming the system at the very bottom. They’re probably foreigners anyway. Work shy and foreign, and probably black, or Muslim, or both. My aspirational millions must be protected.

There are those who game the system at the very bottom. That they steal less than is paid out by mistake is inconsequential. There are fewer votes in assailing the incompetence of public-sector workers and their antiquated technologies than there is in condemning the poorest. There are no votes in attacking those enterprising self-employed folks who dabble in the black-economy. We applaud tax-avoidance. We laud the entrepreneur. But we will vote for anyone who deals firmly with those at the very bottom, who need social-welfare just to survive.

There are no easy solutions.

There are 83,000 millionaires in Ireland. The State has proven itself incompetent. Taxes can be too high. Our services are creaking. We in the middle are struggling. There are no easy solutions. But sure fuck it, let’s burn a few witches and warm our hands on the fire.