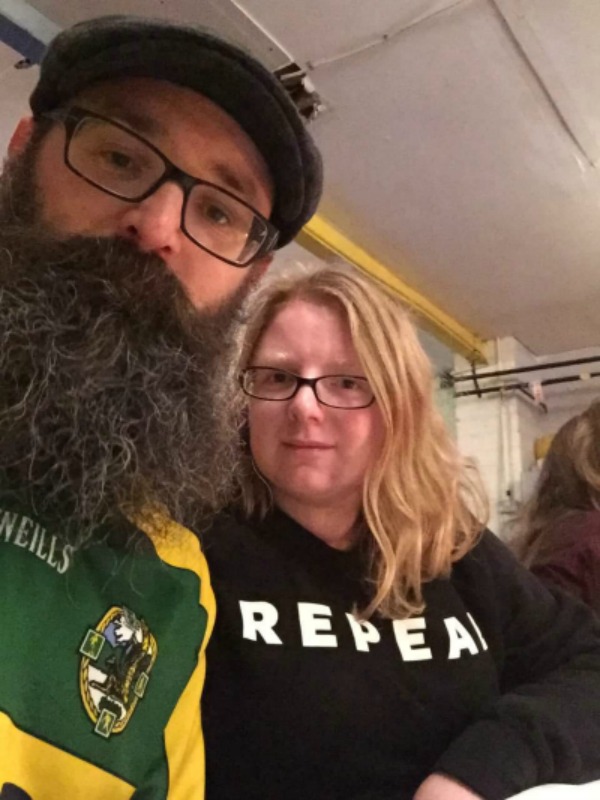 I hate nostalgia. Well, I hate other people’s nostalgia. I quite like my own. And I want to indulge my nostalgia as I recently celebrated being two years married to Paula. This isn’t just a piece of nostalgia about Paula. It’s also about Twitter. I’ve a somewhat rose-tinted view of old Twitter. I remember Twitter in 2012 as being a much gentler environment than the febrile maelstrom that it has now become. And it was in 2012 Twitter that I met Paula.

I’d joined Twitter with certain goals in mind. First, I wanted to meet fellow Middle Earth and Federation nerds. I had been assured that nerds lived in the internet and not in really rural Kerry. Second, I wanted to tout my blog. And finally, I’d declaim on politics. I knew everything and would enlighten the gentle folk of the internet machine with my incisive assessments.

I got a bit of a shock. I quickly realised the people there were smarter and more interesting than me. I reacted to this in a way I still take pride in, I enjoyed it. I learned a great deal and I made friends. Many good friends, but friends I never got to see in real life as they almost all lived in Dublin. I found myself quite jealous anytime a tweetup was being planned and I couldn’t go because of either work commitments or lack of funds. But I got to talk about Middle Earth and about why Deep Space 9 is the best Star Trek. And people read my blog. A blog I had to improve as I knew now the calibre of person I wanted reading my thoughts and opinions.

And Twitter being Twitter, it managed to combine my writing and Lord of the Rings into a meeting with the woman I eventually married.

Paula was on Twitter but we weren’t aware of each other. Irish Twitter was tiny so there was only ever a few degrees of separation between us all. The ‘degree’ between us was Andrew Madden. I’d written a piece that had been provoked by an unpleasant (not homophobic obviously as we aren’t allowed say that word anymore) Irish Independent column. It proved a popular post and was brought to Paula’s attention by Andrew. We began to follow each other. There was nothing of romance at this time as I knew Paula to be a lesbian.

The RTE Concert Orchestra was due to perform the music of Lord of the Rings: The Two Towers, and as I’d been to the Fellowship of The Ring performance, I was definitely going to this one. It occurred to me that this would be a great opportunity to arrange my very own tweetup. To finally meet the people I’d been chatting to for a year or so. It took place in O’Neill’s on Suffolk Street. To my surprise and joy it was well-attended and many of the people went on to be guests at our wedding.

Again, there was no romantic connection but there was a connection. I thought she was a lesbian so it didn’t occur to me that a romantic connection was even possible. But a firm friend she would definitely be. What I hadn’t read before we met, was a post she’d written, coming out as bi. We worked out a few months later that it had been published during a Twitter break I was on. Yes, even in Old Twitter, Twitter breaks were a thing.

Poor sheltered culchie that I am, I hadn’t encountered someone who was bi before. I wasn’t entirely clear of the rules. But over a few months of DMs we decided a date was called for. And it just so happened that I’d be in Dublin for the release of The Hobbit: An Unexpected Journey. We’d planned to see each other on 17th as I was going to the cinema on the 16th. But we decided we couldn’t wait so we met briefly on the 16th, before I headed to the cinema. We married 15 months later. Half the guests were friends we had made on Twitter.

I am aware that I remember old Twitter through a fog of nostalgic bliss. But I think you’ll agree that my excuse for doing so is a good one. Because of Twitter (and Lord of the Rings) I met my wife to be. Because of The Hobbit, I went on my first date with my future wife. The only sad part is Paula couldn’t give a shit about Lord of the Rings.