As appeared in Letters – The Kerryman – 9 September 2015 edition

I remember when I was in school, being taught about the horror that was The Great Famine. A million dead, millions more fleeing and a British government that simply stood by and let it happen. At the time I didn’t have as much access to world news as children have today. So I didn’t really know how bad things were for other people.

It makes me wonder if these tech savvy students look at their teachers and think: how is our government different to those terrible Brits back in 1847? What are we doing to help the Syrian refugees?

The population of Ireland halved. Half the population of Syria has been reduced to refugee status. A small portion of these people have sought haven in Europe. We sent our millions on Coffin Ships to the US. Now we bolt our doors against drowning children.

Do we require teachers to instil hypocrisy in our children? To tell them that what happened in 1847 was wrong but refusing to help the Syrians is different because, well just because.

Do we need to teach our children that ambition, sacrifice and solidarity only exist in books? That in the real world, we watch people suffer and die without offering aid, because it has nothing to do with us.

The centenary of The 1916 Rising is fast approaching. What are we teaching our children about what it means to be Irish, when we turn our back on our duty as humans? 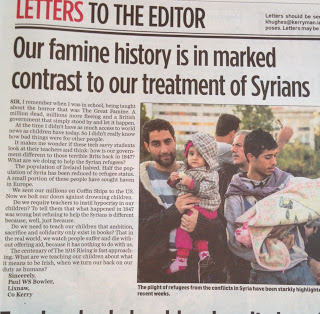