15th April 2015 / Paul W.S. Bowler
As appeared in Letters – The Kerryman – 15 April 2015 edition
We are being asked to decide if gay and lesbian citizens should have the same right to marry as the rest of us. It’s remarkable we’ve got to this point. Homosexual acts were illegal in this country up to 1993. And now, a few short decades later, the LGBT community is on the cusp of equality. In the US, slaves were freed in 1863 but it took a full century for the government to begin passing legislation that granted African-Americans actual equality. Here, criminal class to near equality, in twenty years. Remarkable.
Off course, equality will be denied, unless a lot of straight people make the effort to get out and vote on May 22. And getting people to vote in referendums is becoming increasingly difficult. The country is in the state it’s in and we’ve lost faith in our politicians, so fewer of us feel any enthusiasm for the political process. And it’s hard to feel sympathy for others when paying bills, missing relatives who’ve emigrated and struggling to find a job is the overwhelming reality for so many of us now.
Add that to the distaste generations of us have been taught to feel towards gay people, especially gay men, and the temptation is certainly to sit this one out. Sure no one will be harmed. It’s not my fight. And aren’t there plenty of them in the Dáil now anyway.
It’s a strong temptation. How do I convince a middle aged man, his daughter having gone to Australia to find work, and him dodging phone calls from his Bank Manager because he can’t pay his mortgage, that his vote matters to a bunch of people he’s never met?
There are no magic words. I have no way of making his life better. So all I can do, is ask him to  consider the opportunity this referendum affords him and so many people like him. By simply voting yes, he will, with no more cost than a bit of time, help make the lives of thousands of men, women and children, that bit better. It’s an opportunity I hope we all grasp. 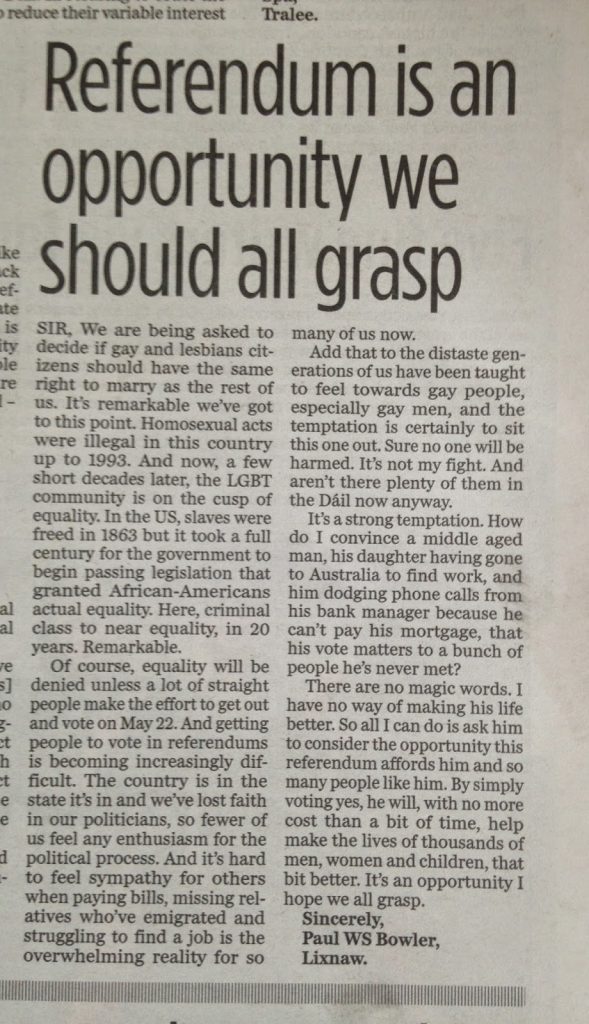