It might just be me, or the company I keep, the television I watch or the newspapers I read, but no one seems interested in the subject of a united Ireland anymore. That might be a healthy thing. I don’t know. It’s certainly strange when we consider that up to recently, men, women and children were being murdered over this issue.

I think it should be discussed more. I know it can be an uncomfortable subject and it can provoke hatred and nonsense, but discussing Northern Ireland and wondering about a united Ireland is a good way in which we can discuss our own nation and nationhood. To imagine a united Ireland one has to examine the why and the how of a united Ireland. It means deciding on how many compromises we’d be prepared to make.

Before I go any further, let me first get my prejudices out of the way. I don’t care if there’s ever a united Ireland. Neither would I care if it was to happen tomorrow. The status of Northern Ireland has no bearing on my identity whatsoever. As long as it’s a functioning democracy, my only interest in it, is as a way of examining this nation. I’m interested in the process that would necessarily precede a united Ireland.

As a united Ireland is very unlikely in most of our lifetimes, this is all theoretical. I’d still ask that you think about the questions and examine the emotions they may provoke.

Do you care in the least about Northern Ireland beyond a wish that the people there live a peaceful and democratic life? Are both traditions up there equally as alien to you? Does the notion of taking all that strife onto our shoulders horrify you?

If a united Ireland represents a progression rather than a victory, what compromise would you make to accommodate a very large minority who have a different identity? Would you sacrifice the symbols that the people of this country take very seriously? Are the flag, the national anthem, the status of the Irish language and our relationship with the UK all on the table?

What would the flag of a united Ireland look like? Would we have three official languages? How would we construct a history curriculum that would respect the heritages of everyone in a united Ireland?

Would Northern Ireland remain as a political entity, like it is in the UK, but ruled from Dublin or would the political system of this jurisdiction be extended to include the whole island?

Can we have two public holidays, one that remembers the men of the 1916 Rising and another that commemorates the men who fought them? Will our army be the inheritors of both these traditions?

As I said, a united Ireland is not likely, but the idea of it can help us decide just what it is we value most about our own identity, here and now. I think that a worthwhile exploration and debate. 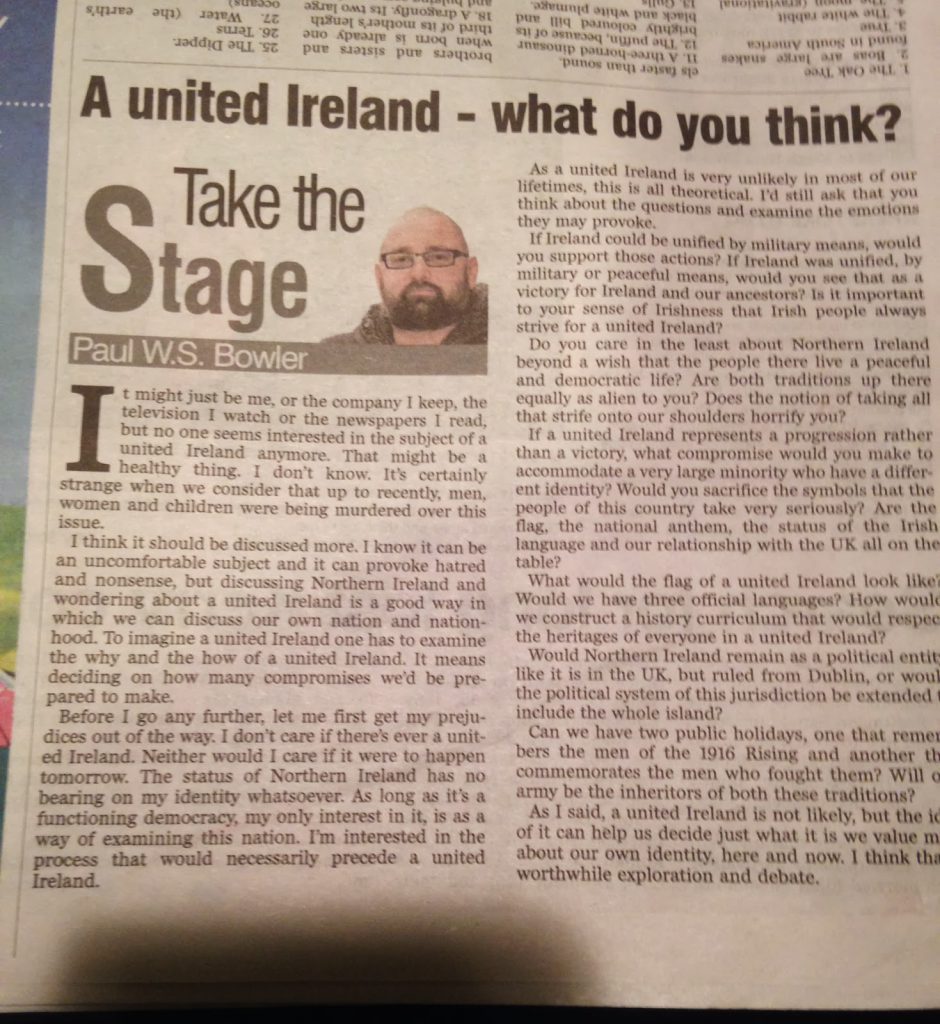