There is a generation of people who remember exactly where they were when they heard President Kennedy had been assassinated. They took his death very personally because he was one of us, an Irish Catholic. The closest I’ve come to that, is on that Sunday in September when Kerry lost to Offaly.

It was 1982, I was eight and I watched the match in my aunt’s house in Ballyduff. At eight I’d no conception of Kerry losing matches, never mind an All Ireland Final. It just didn’t happen. WE never lost. WE were the best. WE were entitled to our five-in-a-row. WE are Kerry.

We are Kerry. Even at eigth, I thought in terms of we. This ‘we’ business is not something we tend to think about, nor wonder the whys and hows of the process. A child is born an individual, but family, schools, the media and friends, teach that child to see themselves as part of a collective. This has positives. We club together to pay taxes which go to ‘our’ schools, ‘our’ hospitals’ and ‘our’ roads.

We’ve even invented symbols to make that process run smoother. We have anthems and emblems and festivals and we have jerseys. The ‘green and gold’ of Kerry, ‘Munster Red’ and the ‘green jersey’ of Ireland. Symbols fed to us from such a young age that we think them natural and real.

It’s not unique to Ireland. Every country uses the same tools to instill loyalty to the idea of ‘we’ above the individual. And we treat those foreign symbols as seriously as we treat our own. Remember when the English rugby team played in Croke Park? There was so much symbolism about, that we almost burst when ‘God Save the Queen’ was played. And when it passed without incident ‘we’ patted ourselves on the back and thought ‘ourselves’ wonderful altogether.

We do love collective self-praise. Unfortunately we aren’t so good at self-criticism and collective responsibility. In fact, we’re awful at it. All through the 20th Century we locked-up women who didn’t toe the line. Some for a few months, others for life. We worked them hard, we took their babies and in the end we disposed of some of them in mass graves. We did that. Hundreds and thousands and tens of thousands of individuals making hundreds of thousands of decisions for an entire century, all resulting in the enslavement of Irish women, by Irish people, in Irish labour camps. We!

There aren’t many of our victims left, but I’m confident and content that these few remaining women, will be compensated from our near empty coffers. But we should not let ourselves off so lightly. Money alone for historical crimes is too easy. Let’s not pat ourselves on the back again, for merely doing the barest of bare minimums.

Why not instead create a legacy that may eventually wipe the slate ‘almost’ clean? Today we don’t have Magdalene Laundries but we have innocent men, women and children being daily reduced in dignity, freedom and hope. We have 5000 Asylum Seekers, who must endure up to seven years of tortuous legal entanglements, to have their escape to Ireland approved. These are the new powerless. This warehoused mass of humanity, starved of the right to say ‘we’ are now safe, ‘we’ are now free and ‘we’ are now equal.

5000 men, women and children, from some of the worst places on Earth. Imagine allowing them to take the Oath. To become ‘us.’ We could save 5000 lives by merely saying yes.

Isn’t that a chapter in a history book ‘we’ would just love to know ‘our’ grandchildren will one day read? 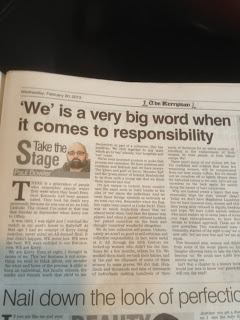