There are few things we would like to hear more at our funeral than, he or she was a person of principle. To be described as someone with principles is to be associated with those virtues we value most; honesty, integrity, consistency and bravery. We owe the existence of our State to people of principle. Men and women who stood toe to toe with an enemy that dominated the planet, yet principle won out.

A week before Christmas, 20 children were murdered by a young man, using weapons American principles allowed him access to. This epic tragedy, uniquely common in America, is an example of why principles are not always a good thing. The majority of Americans have an almost religious belief in their right to own whatever type and quantity of guns they can afford. And woe betide any politician who would dare question this fervent clinging to a principle.

We are so impressed by the idea of principle, we rarely take the time to examine its dangers. We have but to look at our ruinous Civil War to see how principle can destroy as effectively as it inspires. We could also look to the men of principle who flew jumbo jets into The Twin Towers.

Principles can be incredibly destructive. Destructive of life and property, but mostly of thought. Once we place a principle above life, then it is a very short step indeed, to death. Fanaticism has taken hold. Imagine if you can, the warped thought processes of a man who shoots a teenage girl in the head, because she dares to demand an eduction. Where does one begin to explain to a member of the Taliban, why this is wrong? How does one cure such sickness? How does one bridge the gap between humanity and the fanaticism which condemned Jean McConville to torture and murder?

But what of guns in Kerry? I know many people here who own shotguns and rifles. Mostly farmers who are protecting their crops, but others who merely shoot for sport. Some of the weapons in Kerry have been involved in suicides and accidental deaths or injury. They are deadly weapons, but no one suggests that they should be banned.

Why don’t we demand the removal of these dangerous things? Because it would be silly in the extreme to ban the relatively few guns that are legally held in Kerry. The practicalities aside, there is just no good reason why a few incidents of misuse, should be used as an excuse to deny the vast majority of responsible gun-owners the use of these weapons. Even if many of these guns are just toys for big-boys, do we really want politicians to get so scared for us, that we lose access to anything that might be considered dangerous?

I know I don’t. I get very worried when someone says I can’t play with something, just because they think it’s too dangerous. Unless of course it’s my mother. She’s allowed. That’s a principle of mine and this is why I don’t think it’s extreme; we don’t have ordinary people carrying high-capacity rifles that can spew out bullets at high speeds, murdering our children.

We may have our fair share of unwell individuals, but we lack the capacity to kill a dozen children at a time. A shotgun can do devastating harm, but it cannot massacre. A bolt-action rifle can kill at a distance, but it cannot kill en mass. And most fortunately of all, we don’t have an arms industry heavily invested in the ‘principle’ of keeping our citizens terrified and armed to the teeth. 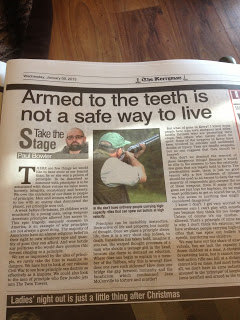