As appeared in Letters – The Kerryman –  5 December 2012 edition

There is something the dead do for us, that no one living can ever manage. They become whatever symbol we demand of them. Whatever symbol suits us best. And who better demonstrates this, than the Men of 16?

Within a few short years, heroes were killing heroes, based on what they thought dead heroes would have done. No one can ask the dead what they think, so a mother of ten children, can be kidnapped, tortured, murdered and her body not returned to her family, because that is what someone thought the Men of 16 would have done.

Not that using the dead is always a bad thing. How many young men and women were inspired by their dead heroes to fight in The War of Independence? It wasn’t a war of chivalry. It was ugly and people died ugly, but the Men of 16 inspired heroism.

Unless of course one is a Unionist. Then the Men of 16, were, and have aways been, a symbol of wrong. They have their King Billy. He might be dead longer than our dead, but dead is dead.

Today we have a new dead hero to inspire us, Savita Halappanavar. We don’t know all the reasons behind why she is dead but the truth hardly matters.

Savita is no longer real to anyone other than her family and the medical professionals who treated her. She now exists as a symbol of inspiration to those who wish to fight for a county not yet realised. A country where women are safe and respected.

Of course safe and protected mean diametrically opposed things to different people. In a recent poll, 36% of people were of the opinion, women are best protected and respected by a right to choose an abortion. Fine Gael received 36.1% of the votes cast in 2011.

For that 36%, Savita is a hero. What she’d think if she’d survived, is immaterial. She was denied an abortion. She died.

In this poll, over 80% were shown to want the x-case legislated for. Most of these people do not want abortion on demand. Savita is still their hero. No matter why she died, over 80% of Irish people now refuse to accept legal grey areas continuing to exist. A woman’s life is too important and the law must reflect this. Over 80%. That’s the combined votes of Fine Gael, Labour, Fianna Fáil and Sinn Féin.

Like all our dead heroes, Savita Halappanavar will divide us as she inspires us. We don’t even know for sure how and why she died, but we are certain she is another dead hero, to be used as we see fit. And we are certain that she is inspiring change, even if it is taking our betters an inordinate amount of time to realise it. 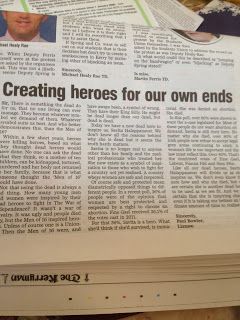