It costs a lot, to stop people rocking the boat. So much, that the people running the boat cannot keep an eye on everyone, yet the boat seldom gets rocked. Why? The people who think they own the boat, use shame. What is shame? It is that invisible policeman, convincing victims they are the guilty ones, condemning them to silence.

Shame is what prevents the victim of a rape from reporting their attacker. It is the reason a parent will feed their child cornflakes for dinner, so they can continue paying the mortgage. It is the reason young men kill themselves, rather than seek help. It’s the reason a spouse will continue to endure abusive fists and slurs.

Can this shame be defeated? Yes. Our mothers and grandmothers demanded access to birth-control. They got on a train to Belfast and returned with condoms. The were supposed to be ashamed. They weren’t and the power to oppress them was broken.

Our mothers and grandmothers were consigned to prisons, if they got pregnant out of marriage. They were expected to feel shame and we ashamed of them. We grew to see their jailing as more shameful. The power to imprison was lost.

Our relations, our friends, our neighbours were abused in too many unimaginable ways by our vicious institutions. They were expected to stay silent about their torture, they were to be shamed into silence. They raised their heads and faced those who took them to hell, breaking the power of the abusers.

How many of us were trapped in marriages of crippling loneliness, but expected to endure? Too ashamed to escape? The shame faltered and we found our release.

How many of our children were born less than perfect and were whipped off to live behind locked doors? Never spoken of, never referred to, never embraced. But that shame turned to love and their prisons emptied.

Today and every single day, 12 women are forced to flee these shores so that they might retain control of their bodies. They do so, as their mothers and grandmothers did so, in silence and in shame. Keeping their heads down, voices silent, needs unmet and freedom denied.

Those who deny them choice, are content for our neighbours to provide the services Irish women require. Content that shame will keep Irish women cowed and bowed. Content for 4000 Irish abortions to take place every year, as long as they occur on foreign soil. Content that Irish doctors are unsure about what treatments are legal or illegal. Content that being the loudest means, they are the ones in charge. Ever hungry to keep things as they are.

Will they succeed? The women of today are learning the lesson their mothers and grandmothers learned. To defeat the shamers, the finger-pointers, the condemners and the moralisers, one just has to remember one thing, who the shame rightfully belongs to. When the oppressed look the oppressors in the eye, the bullies will be defeated. The boat is being rocked.

Some related articles; Things I learned today, To debate or not to debate, Good Abortions?, My thoughts on abortion (In Ireland) 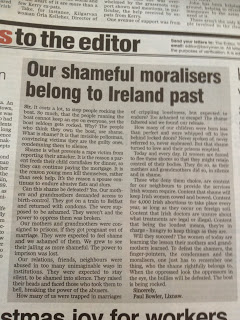 How we vote
Paul W.S. Bowler's books on Goodreads