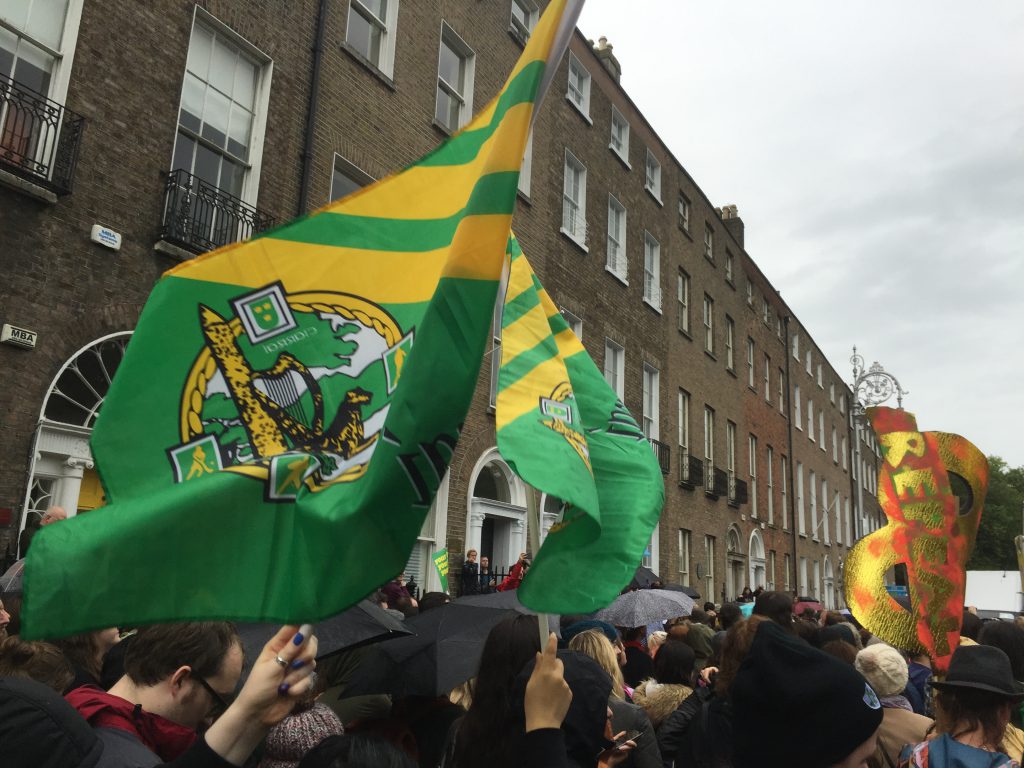 This time last year I was canvassing for the removal of the Eighth Amendment. I’m reminded of that because the sun is shining. I only remember one evening last year when our canvass was interrupted by rain. Imagine that, months of campaigning, in Ireland, and only one day of rain. It was a truly remarkable run of warm comfortable campaigning. I find myself only remembering how much fun I had. It was exhausting and all that but I was walking in the sunshine, every single day, with people I felt honoured to know. What better way to spend a summer? If I’m not careful, by this time next year all I’ll remember is the tan I earned. I suppose, having won by such a large margin also contributes to my rose-tinted reflection.

I find it worryingly easy to forget that we were involved in a life and death matter. That we were trying to free women from the yoke of a pernicious constitutional injunction. I even find it easy to blank out the awful people who were intent on keeping women under the thumb of religious zealotry. Easy to forget. Easy to rest on one’s laurels. Easy to become complacent.

Last year’s campaign cannot be forgotten. And not just because it’s important to acknowledge the amazing work and brave stances of so many women. It cannot only be about commemoration. I wish it was. A few statues, an annual minutes’ silence, increasingly boring war stories, and that would be that. Quickly consigned to an unread history book.

If, to belabour the analogy, we were remembering a victorious war, then growing irrelevance would be grand. Wars should be left in the past. They are wars after all. But we didn’t win the war or a war. I’m not even sure we can call it a battle. We won a reprieve. Some respite. What comes out of that moment of progress, that relief of pressure, is yet to be determined.

I don’t believe in good or bad abortions. I dislike the concept of safe, legal and rare. These are nudges towards judgement. Nudges towards a sliding scale of deserved medical attention. Our law, as it now stands, gives legal standing to this idea. An abortion at nine weeks, fine. At twelve weeks, problematic. At sixteen weeks, you better be fucking dying. So, some women, in very restricted circumstances, can get an abortion in this country. We cannot forget that.

While I don’t believe in rare, I do believe that a good rule of thumb for a better life is never having to go to a doctor. I never feel quite so vulnerable to unspeakable diseases than when in a busy waiting room. Who thought packing a bunch of sick people into a tiny room was a good idea? Fuck that.

A provable way of negating the necessity for some abortions is access to contraception and comprehensive sex education. Remarkably, those who live to restrict the lives of women, I mean oppose abortion, are also against increased access to contraception and sex education that is more suited to the 21st century. It’s almost as if they oppose sex more than they oppose abortion? But they opposed Repeal on human rights grounds, not religious grounds. And we know this must be true because they said it and lying is a big fat sin.

But teaching people about sex, in all its wondrous aspects and providing them with contraception, is more than a way of preventing the necessity for some abortions. More than just a way of avoiding getting the flu in some poorly ventilated room of group sniffles. It is about creating a society where each and every one of us own our body. Get to choose what we do with it. Know how to recognise and respect the boundaries of others. How to have bloody great sex. How to take care of ourselves or others when something unwanted happens. How to value our own choices and to respect the choices of others. Last year we took a single, if large, step towards that goal of educated self-possession. But a single step it was. And those religious campaigners, I mean human rights activists, who rail against free people, especially free women, still own our schools. Still have the ear of politicians. Still have unlimited resources to call on from the US.

Until last year, they wholly owned women. That ownership is now contested, but not yet settled. The sun is shining. It’s great campaigning weather. And for the next month we won’t have to knock on doors because politicians will be knocking on ours. What better use of their time can there be than to be asked how they intend empowering women to wholly own their own bodies?