On Gorillas and Perspective

A gorilla has died and the twitterverse has noticed. The details of his death are clear. In Cincinnati Zoo, a four year old child found his way into Harambe’s enclosure and the staff shot the 400 pound silverback to save the child.

The condemnation is lighting up social media. The zoo has been criticised. There are calls to prosecute the mother. The decision to kill rather than tranquillise Harambe is disputed. The child was rescued almost unscathed by the way.

The child is alive and yet this is a tragedy! I’m not saying that to condemn those who are enraged by Harambe’s slaying. I say it to remind myself that perhaps my priorities are a tad askew. My first thought on reading this story was a kind of grief, followed by anger. There was not a thought for the child or his family. Why is that? Why such callous disregard for the fate of a little boy doing what little boys do? Why do I mourn for a dangerous animal that could quite possibly have killed that little boy?

Why do I feel this? Perhaps not having any children of my own means my perspective is unrounded. But I doubt it is only the childless who are angry about Harambe. Am I one of those who view animals as being the equal of humans? I’m not. I’ve thought about it. I know that since I got a dog, lived with her, gotten to know her, I’ve begun to seriously contemplate vegetarianism and perhaps even veganism. But I enjoyed a slow roasted leg of lamb for my birthday a few weeks ago. I’m not there yet and perhaps I may never get there, but I know that Harambe isn’t worth more or even the same as a child. If it had been an adult, who had gotten into Harambe’s enclosure then perhaps this would be a different conversation.

If it had been chimpanzees I’d be less upset. I love chimps but those are some scaldy fuckers. They are our closest relations, they are being wiped out, they look so much like us, but the threat they would’ve posed is indisputable.

And I guess that’s where the anguish lies. I’m one of those ‘Gorillas in the Mist’ adoring, Attenborough loving, Discovery Channel watching breed of gorilla lovers who feel a connection to gorillas that is emotional rather than rational. We, or I, can’t escape the feeling that if left to his own devices, Harambe would never harm that little boy. Such a noble being, such a wondrous creature, from his paternal embrace, the little boy would certainly have been returned, unhurt, to his mother.

If someone like me had been in charge of Cincinnati Zoo we’d have found out what Harambe would’ve done. There would now, be no uncertainty. The child may have been killed or maimed but we’d know.

Due to human error there was a tragedy (and yes I think Harambe’s death a tragedy) but some tragedies are more tragic than others. A rare and wondrous creature is dead, that we should mourn, but a little boy is alive today who could easily have died. A mother isn’t mourning her child. That is an untrammelled and objective good.

Marriage Equality, how did that happen?

It’s a year since we voted yes, for Marriage Equality. A mere year and what was once considered extraordinary is now ordinary. As the years pass, the pivotal importance of the Marriage Equality referendum will so fade from memory, children will see it in an exam, and get the year wrong. Even those children raised by LGBT parents or children who are themselves LGBT, will struggle to grasp how improbable it was for Marriage Equality to be so overwhelmingly endorsed by the people of Ireland. It’s been a year and I still don’t understand how it happened. 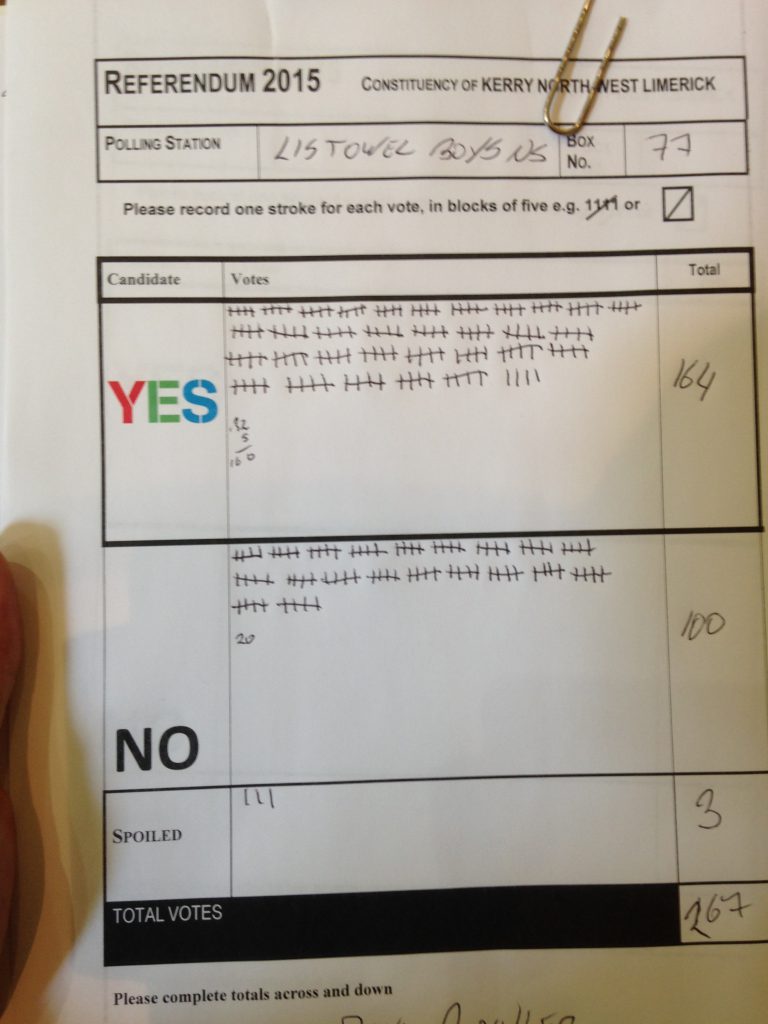 When some future historian sits down to write their thesis on this referendum, I hope they decide to concentrate on Kerry. Not because Kerry was exceptional, it wasn’t. All but one rural constituency voted yes. It merits further analysis because Kerry is geographically far-flung, has a population of approximately 145,000 and is considered to be very conservative. To this, Yes Equality Kerry brought less than a dozen regular canvassers, barely a handful of experienced activists, no trained media personnel, almost zero support from our elected representatives and very little money. Kerry said yes to the tune of 55%. I was there and I still don’t understand how this happened.

Perhaps I am being unfair on the politicians. They did put up posters in Kerry and apparently they canvassed enthusiastically in Dublin. I remember growing heartily sick of the hearing about the canvassing in Dublin. Teams of over fifty people at a time. Twice a day my wife and I would head to Listowel and more often than not, we’d be knocking on doors by ourselves. Every box from Listowel was tallied, every box was a yes. My ego is such that I would love to take credit for that. But I didn’t have to change that many minds and I didn’t endure that much abuse to allow me think anything other than I was pushing at an already open door. I still don’t understand why that was the case. 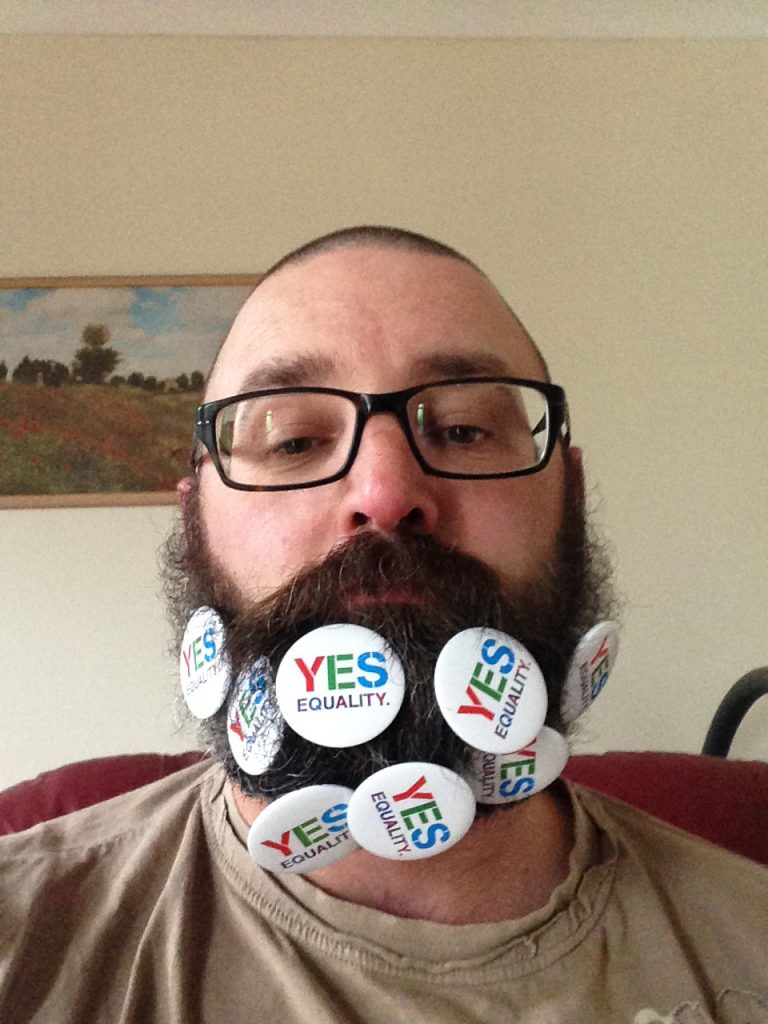 I loved being part of the campaign, but remain utterly convinced that its apparent necessity was hateful. I often tried to imagine what it would be like to be gay or bi and have to ask and beg strangers to please treat me as an equal. My wife is bi, I saw the toll canvassing took on her, but to this day I cannot approach the empathy required to fully experience the emotion of asking a stranger to vote for my equality. The arguments I heard against Marriage Equality ranged from the facile to the bigoted, yet they convinced 45% of Kerry people to reject equality. I still haven’t got my head round that.

I hope that future historian examines the role of the Roman Catholic Church during the campaign. Yes, it was implacably opposed to equality, but implacably wasn’t all that implacable. The institution may have lost a great deal of its influence for having sheltered so many paedophiles and rapists, but that still doesn’t explain how it mattered so little in the campaign. Attendance at Mass is still high. People still like to get married in churches. Parents go all out for First Communions and Confirmations. The schools remain almost exclusively Roman Catholic and there’s a crucifix in the Kerry County Council chambers. Perhaps too many individual priests, too used to meeting LGBT people, couldn’t bring themselves to go all out against members of their community? I’d like to know for sure.

Our local and national media merits a mention. Its cowardice is something I haven’t yet come to terms with. So lacking in any sense of its role as trumpeters of truth, it relegated itself to mere time keepers. It never sought to examine the veracity of the content spewed, only making sure that each side got equal coverage, equal time, an equal say. No matter what witless bullshit was spouted, it was treated as having merit because it was part of one side’s 50%. A week in, I stopped following the debates. How did one of the most important institutions of our civilisation become so reduced?

How did Kerry so change without me noticing? I suspect it still isn’t safe for two men to walk down a street in Tralee at night, holding hands. But now I believe it will eventually happen. I know Kerry didn’t suddenly become a paradise for the LGBT community, but they are now, for the first time in the history of this State, equal to me, before the law. I’d always thought I had a finger on the pulse, but then this glorious thing occurred a year ago and I still don’t know how it happened.