Marriage Equality (some people still haven’t gotten over it)

As I read Frank O’Meara’s (Letters to the Editor, November 18) attack on marriage equality, I must admit to some confusion. He seems to be saying the government is changing the Roman Catholic Church’s definition of marriage. Nothing could be further from the truth. The Roman Catholic Church retains the right to define marriage in whatever way it chooses.

The greater part of the Irish people on the other hand, have decided to define marriage as something more inclusive and instructed the government to open this institution to same sex couples.

The argument is over, all that remains, is for Mr O’Meara to show a little more dignity and move on. 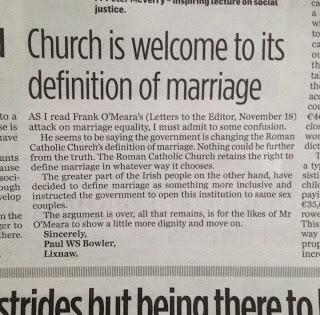