Kerryman Letter re The Angelus

There has been talk about RTE changing or indeed replacing the Angelus. This has caused some upset and, surprisingly that upset is shared by those most attached to the Angelus and those most keen to see it changed.

It may seem a strange issue to be concerned by. The Angelus, on RTE, is a decades old tradition. It has become a part of the fabric of Irish culture. It harms no one and is dearly loved by many. What sort of joyless character would demand it ends? Those of us who are irked by RTE broadcasting, twice daily, a Roman Catholic call to prayer, must come across as arrogant barbarians.

Most atheists and secularists in my experience, however, do not give the Angelus a second thought. Any concerns we may have on the subject are simply resolved by switching the channel. Out of sight, out of mind.

What does unite the atheist and secularist communities, is our segregated education system. A problem most keenly felt by those of us in rural counties like Kerry. That our children’s access to education is hampered by religious segregation is something we will not stop highlighting and campaigning about.

Personally, I don’t care about the Angelus. If it changes or stays the same, it will not impact on me. What I do care about is our Constitution, our education system and our health system, continuing to discriminate against anyone who isn’t a Roman Catholic. 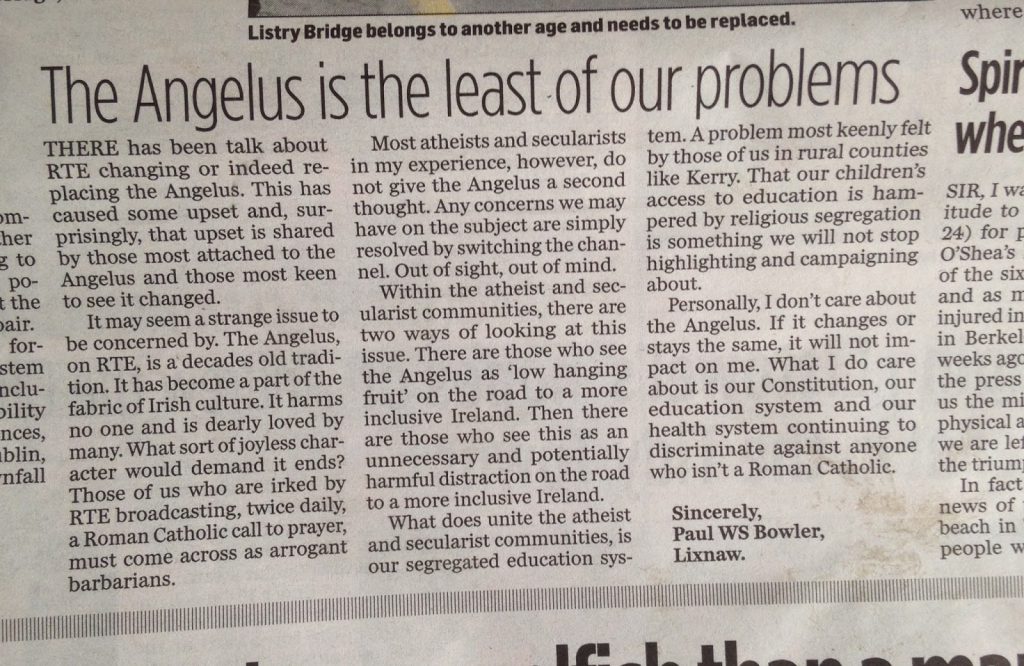