It was with some amusement that I read J. O’Donaghue’s (June 3) attack on liberalism.

Mr O’Donaghue appears to have missed the irony of his position. That he was allowed to write to a newspaper, with the expectation that his opinions would be published, is a gift of liberalism. That he (or any of us) is even able to write is again, another advancement that can be credited to liberalism.

Of course we could return to the pre-Enlightenment utopia of Judeo-Christian ‘humanism.’ Those were the days of burning uppity women at the stake, the Divine Right of Kings to rule, slavery and torture. Liberal progress towards universal health care, education and suffrage came later.

The passing of the Marriage Equality Referendum was not a victory for the LGBT Community or unsupported feelings. It was more a realisation that our enmity towards that community was based on ideas not backed by facts. It was an enmity that was illogical. It was nothing more than a prejudice, maintained by emotion and tradition.

Yes, liberalism is messy. It lacks a holy book of instruction. And it has a lot of blood on its hands. Some of that blood being members of the LGBT Community.

But it is an ideology that learns. Slowly, often painfully slowly, but it does, by freeing the individual, encourage and promote progress. Though the greatest strength of liberalism, is that beyond a firm belief in personal freedom, you can’t get two liberals to agree on anything. That’s probably why conservatives, Roman Catholics and Marxists hate it so much. It is a very human idealism. 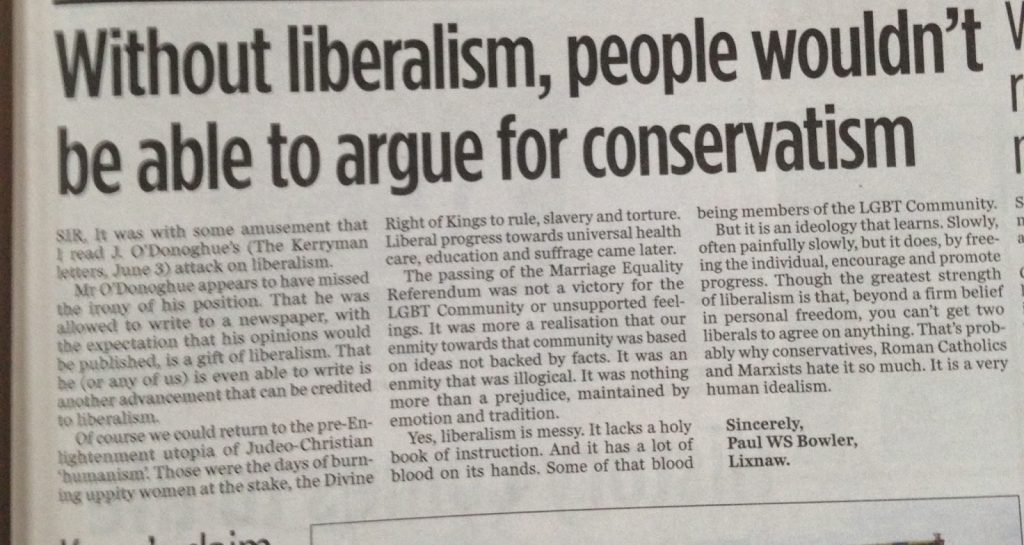