Recently the Kerry County Council voted to hang a crucifix in the Council Chamber.

This is a link to a Radio Kerry interview with Councillor Joe Culloty who proposed this.

This is a link to my interview with Radio Kerry arguing against it.

And this is a letter I wrote to The Kerryman on the same topic.

There is an unfortunate side-effect to the decision of Kerry County Council to hang a crucifix in their chamber. Though an atheist, I’ve always been comfortable assuming the vast majority of my elected representatives will be Roman Catholic. I trusted they would put our common citizenship above our differing belief systems.

I’m now going to have to ask each council candidate what religion they practice and I’ll need to know how invested they are in that practice and if they’ll represent me to the same extent as someone from their religion.

The Council has decided to privilege one religion over a whole hosts of others, for no reason other than it is the religion of the majority. Will we next see a shrine to white skin? A shrine to heterosexuality? A shrine to the able-bodied? A shrine to people who aren’t in negative equity? 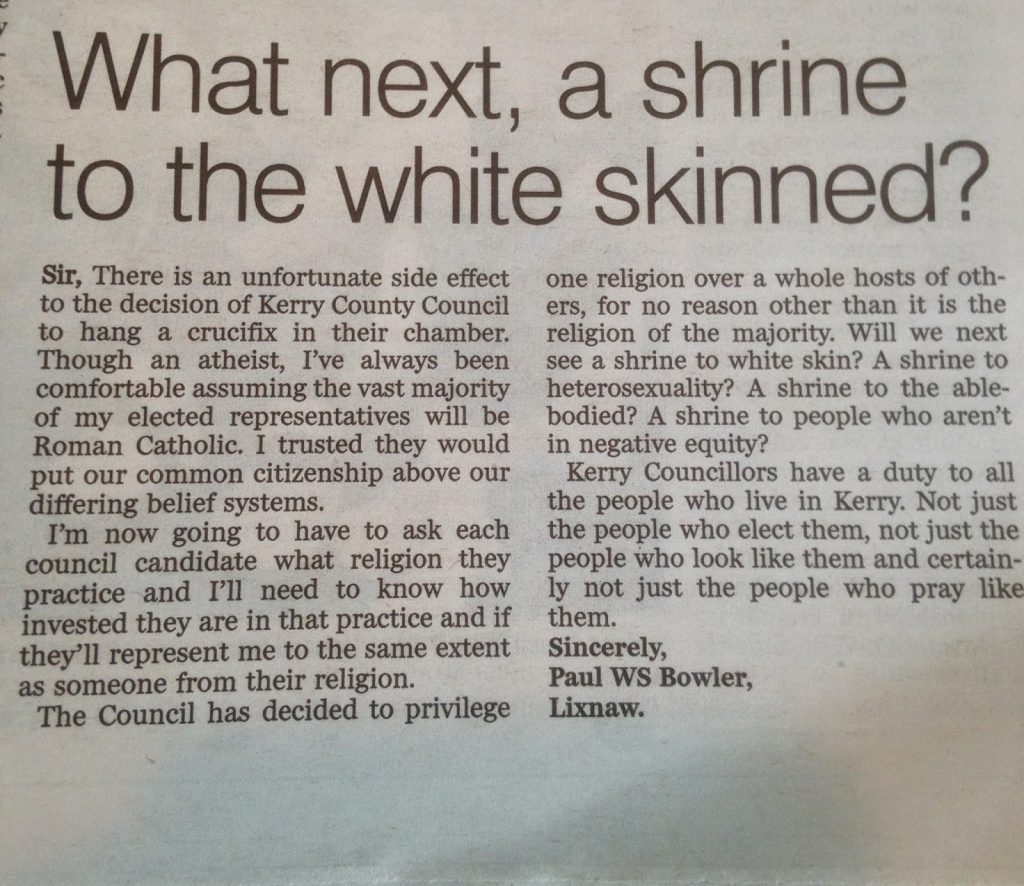 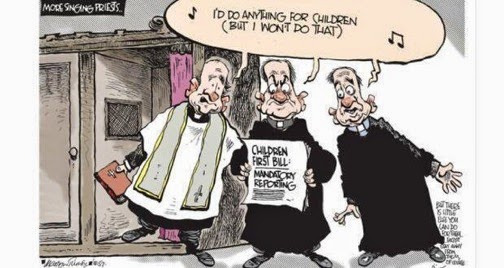 I’ve a certain sympathy for Priests but…

I worked with children in Residential Care for about ten years. I began my career around the same time that the Madonna House scandal broke. It was discovered that this institution, this refuge for those most in need of protection, was a place where the sexual abuse of children was rife. For those of us starting out in the profession of Social Care, it was a body blow to our enthusiasm and our sense of ourselves as carers and advocates for society’s most vulnerable.

It was not without some positive effects. We quickly had to rewrite the rules of engagement. No longer was it acceptable to just trust a colleague. We had to put policies and procedures in place that made the abuse of children in our care, not just unlikely, but almost impossible (almost being the operative word, nothing is foolproof).

There were some missteps. For a time we believed no child would lie about being sexually abused. When it became apparent that an emotionally damaged child was capable of using allegations of sexual abuse, we became very wary of ‘mandatory reporting.’ I’m still uncomfortable with it to be honest. Our aim became making things so safe, for both service-users and staff, that if an allegation was viewed as credible, then no obligations would be necessary. That would be a career in jeopardy, whether innocent or guilty.

This need to be safe and to be seen to be safe impacted on a great many facets of our care, the way we hugged the children (only ever side-on), how we said goodnight (one foot outside the bedroom door at all times) and even how we spoke in private with them (staff detailed to ‘inadvertently’ walk into rooms where a staff and a child were having a meeting). It was a lesson in paranoia that I learned well. So internalised that even ten years later, I am still uncomfortable around children when there are no other adults around. I even hear alarm bells watching TV programs if I see an unaccompanied adult male with children.

It is a paranoia born of negative reinforcement. The fear of losing one’s career and the dread of having an allegation hanging over your head that could not be one hundred percent disproved. To be known as a possible child-abuser, the lowest of the low. So we became very consistent in our practice. And it paid off. The children in our care were safer. The culture of insidious impunity ended.

I know I was damaged by the process, but I do not regret that. I was part of a service that was evolving. It could not aspire to perfection, but it did aspire to safety and I think it largely achieved that. Of course, like with everything, vastly increased resources (even on top of the vastly increased resources we did receive) would have made the lives of a great many children, so much better.

I embrace that damage, because it was necessary. We were undoing a culture of abuse, while caring for the victims of that abuse and simultaneously attempting to find an intellectual basis for the policies and procedures we were trying to intuitively evolve. And always, trying to create therapeutic environments in those overcrowded houses.

I lasted ten years. I’m proud of about six or seven years of that. The balance was spent unaware that I had hit the wall. If I had it all to do again, I wouldn’t. It was terrifying and emotionally scarring. And I was exposed to the depravity that lurks in our species. But it was vital work. If I live to be a hundred, I will never again be involved in such a noble task. Can there be anything as important as caring for children?

As Tom Meagher says in this wonderful piece, the perpetrators of horrible crimes are for the most part, seemingly ordinary people. High functioning individuals who blandly go about their business of destroying lives while still part of society.

The Roman Catholic Priesthood with its unnatural strictures against sex and family was obviously going to have an above average number of sexual deviants. They should not be condemned for that. I can’t condemn them for those numbers because my profession has similar numbers. Some of our sick people even had partners and children of their own.

What then is different between me and a priest? It’s a question of loyalty. There is no one in my profession, even if they are a friend of 20 years, who I wouldn’t without hesitation, throw under a bus, if I suspected or knew they had abused a child in their care. That is not some kind of professional credo. In fact it’s goes beyond a question of loyalty. It’s a duty of care. It’s a morality that always and everywhere, puts children first.

I have a great deal of sympathy for the paranoid priest. He is a man I can respect. I can relate to that paranoid priest. That is a man who knows he has a job to do and that he must do it in very fraught circumstances. He will examine the policies and procedures that govern his interaction with vulnerable people. He will do all to ensure that every ‘t’ is crossed and every ‘i’ is dotted in those polices and procedures. He will ensure his parishioners are aware of the policies and procedures and he will endeavour to be very public in his adherence. Ensuring the safety of all but also ensuring the education of all. Ensuring that a standard will be set that his successors will be obliged to meet.
Thing is though, that priest no matter how conscientious, still regards himself as having the right and the duty to keep the secrets of child abusers. That pernicious arrogance, that perverted morality, makes a mockery of any child protection policies and procedures. No one would trust their child with a child abuser, that’s obvious. But how many of us would trust our children with men who do not feel obliged to bring child abusers to earthly justice?

I do not think priests should be forced to break the Confessional Seal. There are just too many people in this country who believe in the magical properties of Confession. Further, a frontal assault would just reinforce the culture of martyrhood the majority religion likes to don. We are left then, with the simple hope that this ‘perverse belief’ will in time, simply dissipate under the weight of its own ugliness.

Till then I mourn for all the children that secrecy condemns and has condemned to continued abuse and rape. I mourn for the good men who have had their sense of decency so perverted that they place a duty to their god above their duty to children. That is a wound no one has ever been made answer for.