Am I islamophobic? I’m not sure. As I’m not sure, I should try unpacking the term a little. Does islamophobic speak to an irrational fear, much the same as my fear of spiders? A fear that even makes me a little suspicious of people who are not afraid of spiders. A fear that makes me vacuum my ceilings more assiduously than my floors. Actually I’m not beginning at right place. First is islamophobia primarily a fear of Muslims or is it more concerned with Islam?

Or is islamophobia more akin to homophobia? The term homophobia (no matter the lies of homophobes) has evolved to mean an attitude toward gay people, that is similar to the view racists have towards people of colour and misogynists and sexists have towards women.

So am I islamophobic? I still don’t know.

There are people who think Islam is a particularly violent and dangerous religion. That it inculcates its adherents from any regard for reason or compromise. It’s not a difficult conclusion to reach if one watches the news. The ‘Muslimy’ parts of the world are always providing us with terror, destruction and all things awful.

How could one not be scared by the wanton death and destruction?

I recently listened to Dr Ali Selim, extoll the virtue of increased inclusivity in Irish schools i.e. more should be done to cater to the religious prejudices of Islam. It’s not an outrageous request. Especially if one takes one’s religion seriously and when one is a minority in a sectarian country (as Ireland constitutionally and institutionally is). In this situation demanding space for one’s own religion is entirely correct.

Of course all I heard was his Islamic prejudices about girls, music and sex. The homophobia was unstated. I am after all a liberal so his words irked, perhaps even scared me a little. Islamophobic?

I am terribly vain, so vain that I like to think of myself, (vain and pretentious) as a tiny player in the somewhat inchoate campaign to counter the misogynist, homophobic and anti-secularist tendencies that already exist in Ireland’s institutions and culture.

So I get a little freaked when I see the other side joined by a growing and very self-confident interest group, which has at its core an irredentist religiosity that would make even the Iona ‘Institute’ blush. OK, maybe not them, but many other Roman Catholic interest groups.

And of course the horror we see on the news and the words opinions of Dr Ali Selim are entirely representative of Islam. They represent the thoughts, aspirations, prejudices and hopes of every man, woman and child in Ireland who adheres to whatever version of Islam they adhere to. Don’t they? Is that islamophobic?

Not being an expert on Islam, I have to ask if it is inherently violent or is Islam merely the religion of the majority of people unfortunate enough to find themselves residing in a region, where despots are kept in power by governments from my liberal part of the world?

I don’t know the answer to that. I do know that I can’t think of any religion without an ocean of blood occupying the space their consciences should be. Nor can I think of any time in history where oppressing people didn’t require overwhelming violence and the judicious use of idealism/religion.

But what of Dr Ali Selim and his call for girls to be separated and/or to be allowed hide themselves in religious garb. He pushed my buttons. Am I islamophobic?

Our education system is, for the most part, predicated on the concept of religious indoctrination. It’s built into the daily timetable. It’s just that it’s not his religion being poured down the throats of children, so his demands are perfectly reasonable. Well, perfectly reasonable if the aim is to separate our children from as early an age as possible.

His words irked, even scared me, because their intent is to increase exclusion, but more, his words made me uncomfortable because well I forgot something important, two things actually. First, Dr Ali Selim was hawking a book and second, being on the radio does not equal representation.

I know this because I have been on the radio several times speaking about atheism and will be again. I’ve even had a weekly newspaper column where I got to extoll the virtues of atheism. And of course both these platforms are perfectly meaningless.

Am I representative of Irish Atheism? Of Kerry Atheism? Of any atheists? I figure about a dozen atheists know me by name and most of them think I’m a bit of a dick. So who or what do I represent?

I represent the men (it’s mostly men) who love the sound of their own voices so much that they call radio stations and write to newspaper editors. I am, in fact, a loudmouth with a surfeit of opinions. I may firmly believe that I would feel more comfortable living in a secular republic, but I have no proof anyone else would.

But an emotion was provoked, does that mean I am islamophobic?

I do have Roman Catholic friends, but I struggle to imagine sharing my life with one. I just can’t imagine the coming together of such disparate world views.

I’ve seen it done, yet it still seems too unlikely to me. I’d feel the same about someone who believed in homeopathy or paganism or someone who thinks nationalism is anything more than a hobby to be indulged in on weekends.

Is it naive or cynical to think love does not conquer all?

So am I islamophobic? I’m not sure I can say without a shadow of a doubt that I’m not.

I do know for a certainty that I fear the addition of even more religiosity in an already overwhelmingly religious nation. I know I fear certain aspects of Islam and I fear the energy Muslims may give to the Roman Catholic conservatives who already have their feet on the throats of women and LGBTQ people.

I am also subject to my own values, and those values do not allow for prejudice against minorities. And in my world, Muslims do constitute a minority. In my world Muslims should be as loud, proud, pushy and obnoxious as any culchie atheist shouting for more secularism in this god ridden country.

So yes, I think I may be islamophobic, perhaps a little less than I was yesterday, but the prejudice is there. It’s there, living right beside an obligation to do something about it.

Over the past few decades an unknown number of Chinese women have been forced to have abortions. This is because the Chinese government has a strict one-child policy. It is rightly condemned as a barbaric practice. We all agree women deserve better than this.

When the Protection of Life During Pregnancy Act passed last year, I imagined Ireland was going to treat women better. I was wrong. Women can now be forced to continue with pregnancies they wish to end. They can be threatened with force-feeding and pressured into consenting to major surgery. Don’t women deserve better than this?

Why do some women in Ireland now face forced births? Is it simply the result of bad legislation? Is it because our politicians are too cowardly to offend the people who favour forced births? Or is it because they don’t think women deserve any better?

All law concerning women’s reproductive health has since 1983, been subject to the Eighth Amendment. No one under 49 years old has been offered the opportunity to remove that Amendment. Not a single woman of reproductive age has been able to vote on the Constitutional Amendment which limits their access to reproductive care. Surely those women deserve better?

If our politicians remain steadfast in their cowardly refusal to address the Eighth Amendment they could at least seek to reduce the harm caused by the resultant legislation. We now know that only girls and women in poverty or in the care of the State are unable to travel to the UK for abortions. The government has it within its power to ensure no woman is denied an abortion because of financial straits or citizenship issues.

It is the very least that women deserve from a government who refuses to offer them a genuine choice. 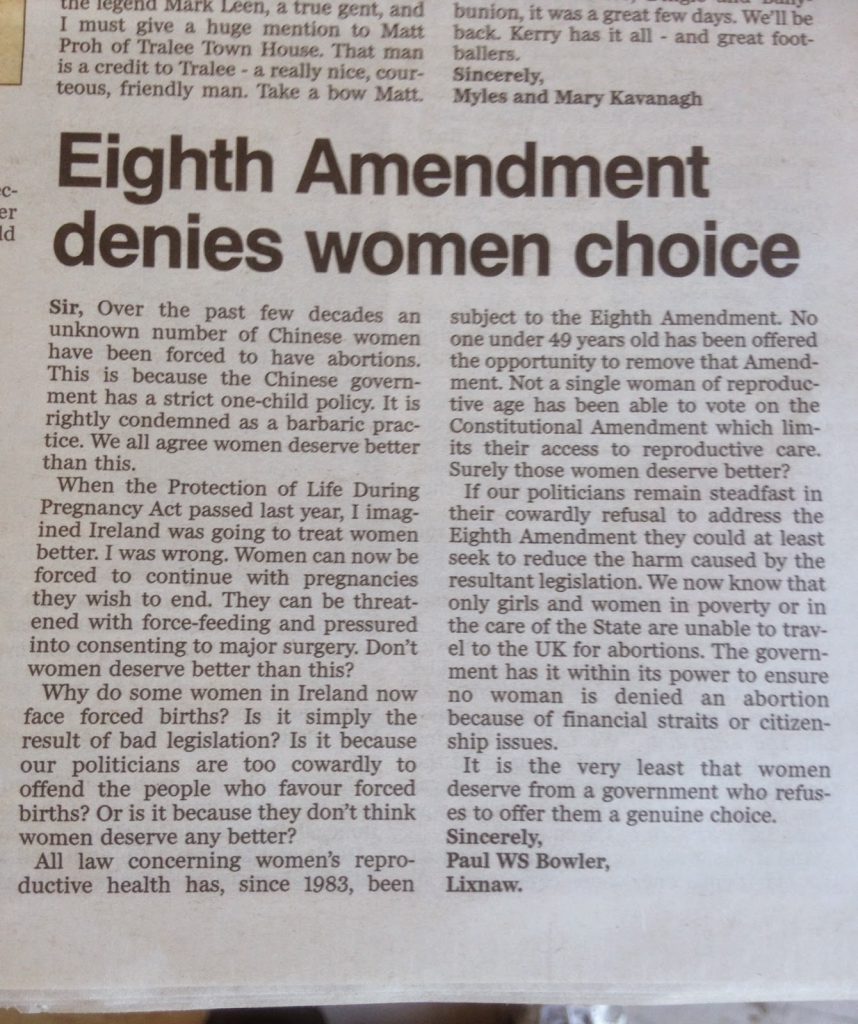